Explore some of the biggest moments in Sundance Film Festival history with behind-the-scenes photos from Shutterstock’s collection.

Every winter, tens of thousands of movie lovers head to Park City, Utah for the Sundance Film Festival, a ten-day showcase of independent films. It’s the prime destination for industry bigwigs, ambitious up-and-comers looking to catch their big break, and everyone in-between. This festival has also been home to some of history’s great films. It’s also launched the careers of icons, both behind and in front of the camera.

The 2019 Sundance Film Festival will run from January 24th through February 3rd with a total of 112 feature-length films. In anticipation of this year’s festival, we combed the Shutterstock archives for some of the best and most unexpected photos from Park City. While some Sundance photos seem to run with every headline, we wanted to find some hidden gems. Below, you’ll find fifteen moments from festival history that you’ve probably never seen before. 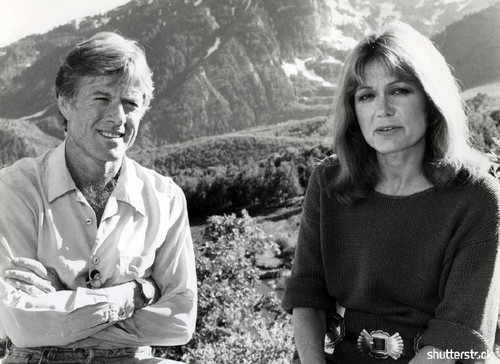 This photo is likely from a rare interview in 1986 with Ms. Magazine’s Gloria Steinem. It was the first interview Redford agreed to do in five years, and it took place against the stunning backdrop of the Utah mountains. At one point, speaking with TODAY, Steinem foreshadowed the importance of the festival. She noted that The Sundance Institute might someday grow to “become to moviemaking what Off Broadway is to plays.” 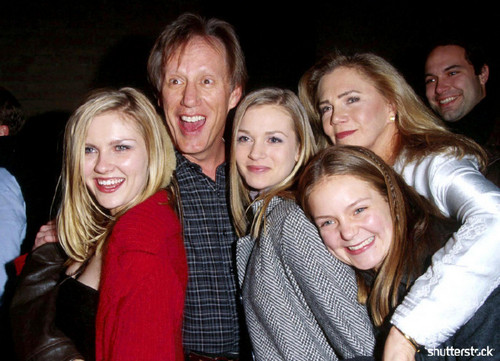 In 2000, Sofia Coppola headed to Sundance with The Virgin Suicides, her debut film as a director. As CNN noted at the time, this year at Sundance featured the largest percentage of women filmmakers of any year previously; Coppola was in good company with Mary Harron (American Psycho) and Kimberly Peirce (Boys Don’t Cry).

To this day, her tragic yet funny film on adolescence continues to resonate. “A couple of years ago, a bunch of teenage girls told me how much they loved The Virgin Suicides,” Coppola told The Guardian in 2018. “I thought: ‘How do they even know about that? They weren’t even born.’ It’s nice to know that it still speaks to some young women.”

This snap features the cast of the film as they celebrated in Park City. 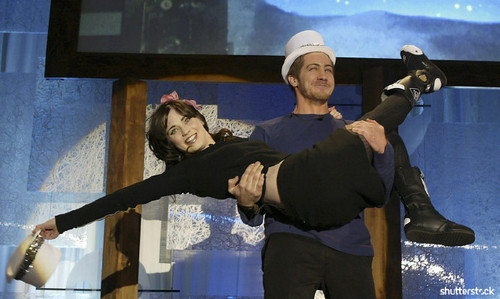 In 2004, Zooey Deschanel and Jake Gyllenhaal cracked up the crowd (and each other) by singing and dancing in what Sundance would later dub a “Classic Festival Moment.” Both hosts were Sundance “regulars;” Deschanel was in The Good Girl the year prior, and Gyllenhaal starred in Donnie Darko in 2001. And as it happens, the hit film (500) Days of Summer, with Deschanel in the title role, would arrive at the festival five years later. 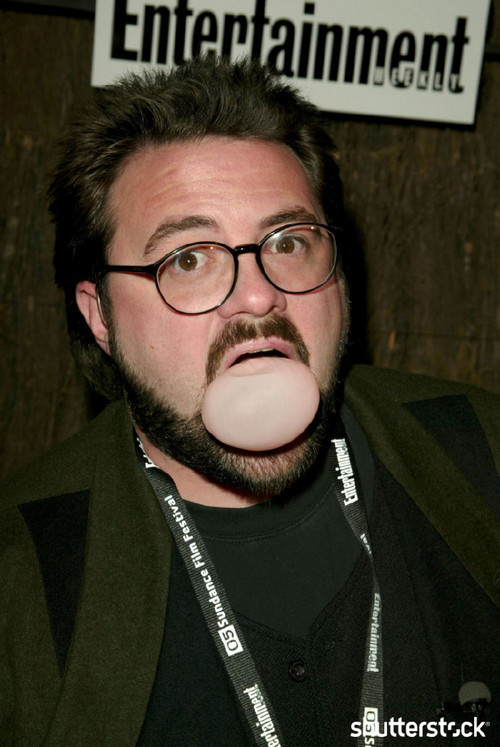 In 1994, a low-budget black-and-white comedy from producer Kevin Smith was accepted into Sundance. The title was Clerks, and that “little” film hit the big leagues when Smith sold it to Miramax. “I know where I was the moment my life changed,” the produced would later say, recalling that instant he knew he got into the festival. “I was on a payphone in a convenience store in New Jersey.”

Here he is blowing a bubble in 2005 back in Park City, where his career took off a little over a decade earlier. 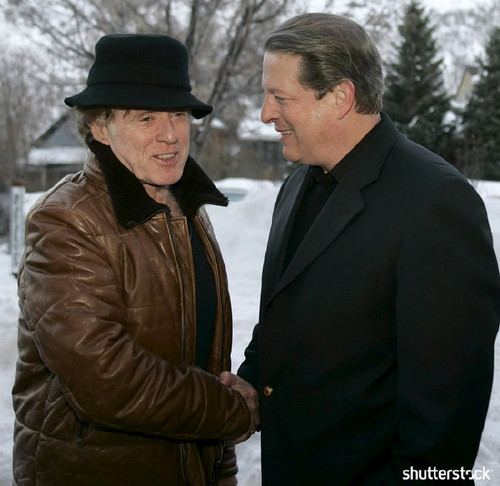 In 2006, former Vice President Al Gore helped open the public’s eyes to the imminent dangers of climate change with the award-winning film An Inconvenient Truth. With that, he became the unlikely “star” and “leading man” of the Sundance Film Festival, but his goal was bigger: he wanted to change minds and help save our planet before it was too late. At the time, Gore said, “I have seen already that movies have the ability to touch people in ways that no amount of speechifying can ever do.” 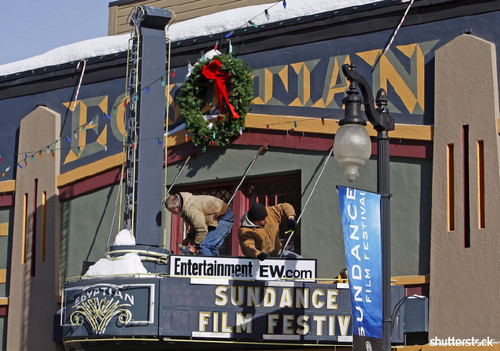 Workers Install a Sign On the Top the the Egyptian Theater On Old Main Street in Preparation For the 2008 Sundance Film Festival in Park City Utah USA. Wednesday 16 January 2008. Photo by George Frey/EPA/Shutterstock

The Egyptian Theatre has been part of the festival since 1981. It was called the US Film and Video Festival then, and had only just relocated to Park City. The theater has since undergone renovation and restoration. But throughout it all, the Main Street fixture has remained an iconic destination for film-lovers. In this photo, workers are getting the theater ready for the 2008 Sundance Film Festival on a chilly January day. 45,056 people would be in attendance that year. 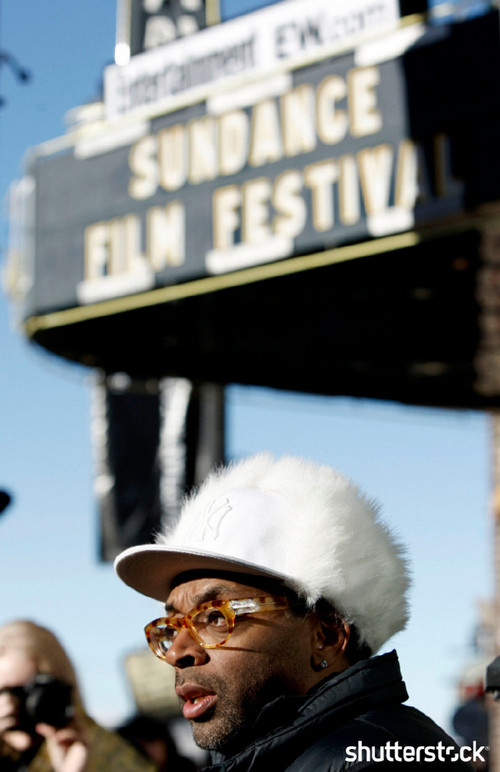 In 2009, Spike Lee made his way to Park City with Passing Strange. This filmed version of the musical by Stew tells the story of one African American man’s journey from Los Angeles youngster to European boho artist. As it happens, Stew had previously developed the Tony Award-winning show at Sundance Institute’s Theatre Lab in 2004.

Lee initially toyed with the idea of adapting the play as a movie. Instead, he chose to film it live on Broadway, preserving its legacy for generations to come. Despite being leader in the independent film world, Lee hadn’t visited Sundance before due to scheduling conflicts. Here he is in his faux fur Yankees hat, which even made it into the New York Times article about the film. 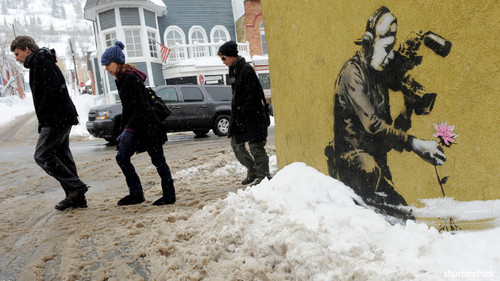 Banksy Festivalgoers walk up Main Street past a design by graffiti artist Banksy during the Sundance Film Festival in Park City, Utah, 2016. Photo by Chris Pizzello/AP/Shutterstock

In 2010, Banksy left his stamp on Sundance in more ways than one. To coincide with the premiere of his documentary Exit Through the Gift Shop, works by the ever-elusive street artist appeared in the Park City streets. One of the pieces even popped up on a stage door at the Egyptian Theater! 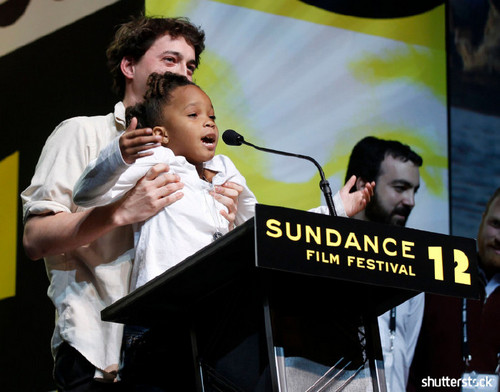 The actor Quvenzhané Wallis was only eight years old in January 2012, when Beasts of the Southern Wild premiered at Sundance. The film, directed by Benh Zeitlin, told the story of a girl (Wallis) growing up in the Louisiana bayou. The New York Times called it “the standout of this year’s Sundance and among the best films to play at the festival in two decades,” and Wallis ultimately became the youngest person ever nominated for the Academy Award for Best Actress. Here are Zeitlin and Wallis accepting The Grand Jury Prize: U.S. Dramatic at Sundance. 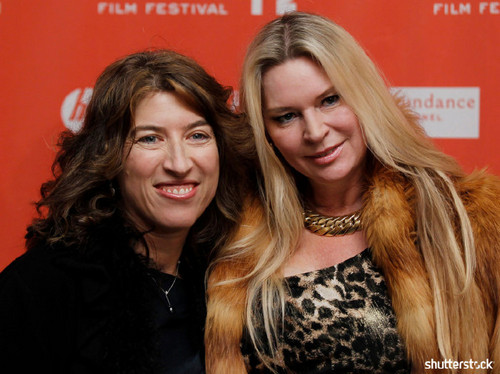 In 2012, Sundance featured multiple documentaries on the consequences of economic uncertainty throughout the United States. Not least of these films was The Queen of Versailles by Lauren Greenfield. The critically acclaimed photographer and documentary filmmaker followed the life of Jackie Siegel, the wife of businessman David Siegel, and her family as they adapted to changing financial circumstances.

The project started off perhaps as a glimpse into over-the-top lives of the ultra-rich. But, it soon turned into a particularly resonant story for the times. Greenfield told The Washington Post, “When they started to be affected in ways that were similar to how other people had been affected by the crisis, namely losing their home and losing their dream, I realized it was a bigger story that was really an allegory about the overreaching of America.” Here, she and Jackie stand for a portrait at Sundance. 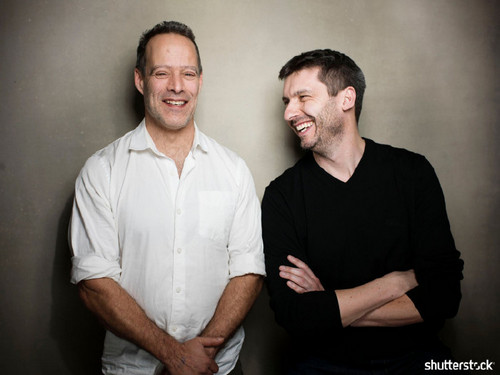 From left, director Sebastian Junger and producer James Brabazon from the film “Which Way Is The Front Line From Here” pose for a portrait during the 2013 Sundance Film Festival at the Fender Music Lodge on in Park City, Utah. Photo by Victoria Will/Invision/AP/Shutterstock

In 2010, the photographer Tim Hetherington and the journalist Sebastian Junger brought their documentary Restrepo to Sundance and revealed to the world the horrors of war up-close. The film followed a platoon of U.S. soldiers at a dangerous outpost in the Korengal Valley, Afghanistan, fully immersing viewers into the realities of conflict.

Hetherington died tragically on the frontlines of the Civil War in Misrata, Libya, in April of 2011. In 2013, Junger returned to Sundance, this time with a film about his fallen friend and colleague. The film Which Way is the Front Line From Here?The Life and Time of Tim Hetherington featured interviews with the photographer, made during his lifetime, as well as those who had known him, in the wake of his passing.

“I hope that my friend’s death might be able to inform other journalists and the general public about the risks of the job,” Junger told The Guardian at the time. He also started RISC (Reporters Instructed in Saving Colleagues). This organization helps train freelancers in combat medicine, in Hetherington’s memory. In this photo, Junger is joined by the film producer James Brabazon. 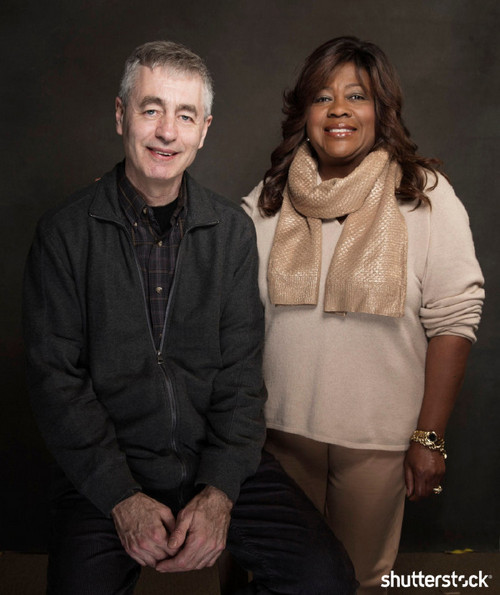 Steve James and Chaz Ebert pose for a portrait at Quaker Good Energy Lodge with GenArt and the Collective, during the Sundance Film Festival, in Park City, Utah, 2014. Photo by Victoria Will/Invision/AP/Shutterstock

In 1994, the documentary film Hoop Dreams became a Sundance classic. Twenty years later, the director Steve James again made festival history with Life Itself. Based on the memoir by Roger Ebert, this new movie followed the life and career of one of the greatest film critics of all time. Sadly, Ebert didn’t live to see the film completed. As he presented his documentary at Sundance, James was visibly moved. Later, Ebert’s wife Chaz told audience members that her husband would have given Life Itself “two thumbs up.” Here she is with the director in Park City. 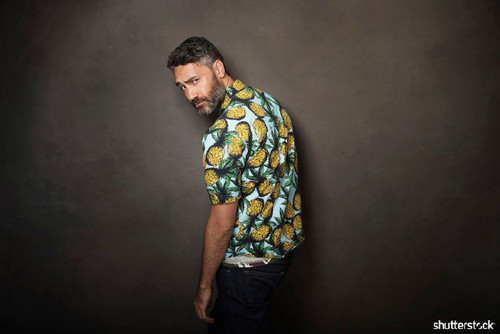 Taika Waititi poses for a portrait at Quaker Good Energy Lodge with GenArt and the Collective during the Sundance Film Festival, in Park City, Utah
2014. Photo by Victoria Will/Invision/AP/Shutterstock

New Zealander Taika Waititi introduced his short film Two Cars, One Night as part of the Native Forum at the 2004 Sundance Film Festival, planting the seeds for a legacy that has continued with movies like Eagle vs. Shark, Boy, and Hunt for the Wilderpeople. Through the years, Waititi has been an important part of the festival, both as a seller and a buyer. Here he is in 2014, when he returned to Sundance with his vampire comedy What We Do In the Shadows. 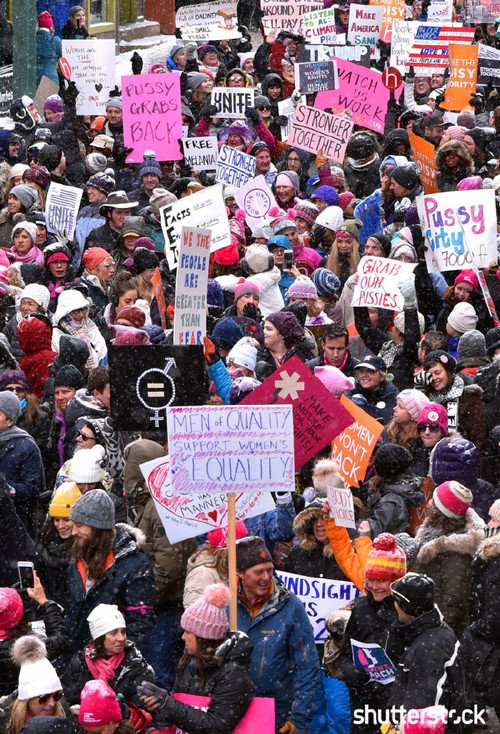 In the wake of a controversial election, the Women’s March hit Park City in January 2017. Despite the snow, the event drew an estimated 8,000 people coming out in support of gender equality. The march was not associated with Sundance in any official capacity. But, among the masses were plenty of recognizable faces within the film industry. With the actress Chelsea Handler leading the charge, March on Main included Hollywood stars like Charlize Theron, Laura Dern, John Legend, Joshua Jackson, and many more. A few highlights from that year’s festival included The Big Sick, Get Out, and Whose Streets?, along with Al Gore’s return to Sundance for An Inconvenient Sequel. 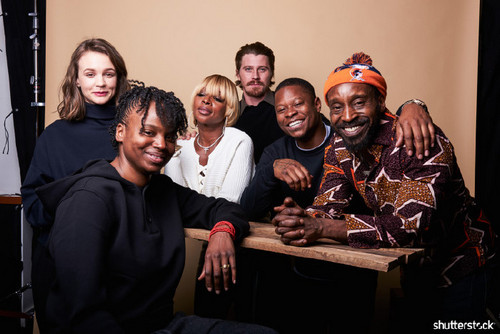 Dee Rees has strong roots at the Sundance Institute, beginning when she workshopped her first feature film Pariah at the Director’s Lab in 2008. The movie premiered at Sundance in 2011. It later went on to win numerous awards, including Outstanding Independent Motion Picture at the NAACP Image Awards.

In 2017, Rees returned to the festival with Mudbound. This powerful drama explored family ties, race, prejudice, and the aftermath of WWII in rural Mississippi. In this photo, she’s sitting for a portrait with the cast. That year, Netflix bought the film in the biggest sale of the festival, and in August, Rees would go on to accept the Sundance Institute Vanguard Award. 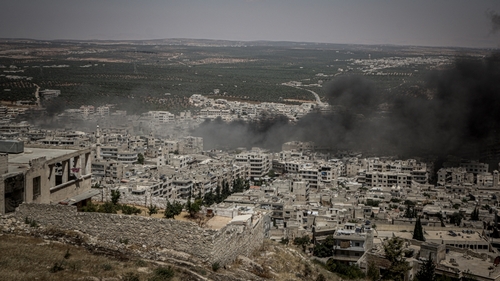 Ideas for your home: How to transform your old kitchen for a week, having a modest budget

4 thoughts on “15 Priceless Photos from the, Sundance Film Festival”