Brazil’s Supreme Court on Tuesday rejected an appeal by imprisoned former President Luiz Inacio Lula da Silva who argued he should be freed because leaked private messages showed that the judge who convicted him was not impartial. 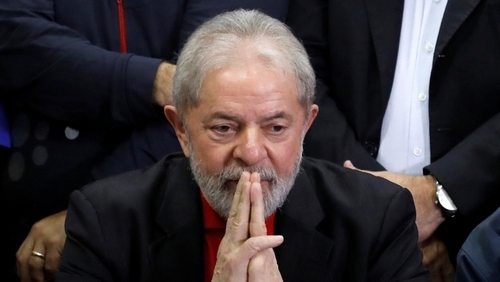 The court voted 3-2 to postpone debate on whether Brazil’s Justice Minister Sergio Moro had been impartial when he handed Lula his first conviction in 2017 and dismissed a petition to let Lula out of jail until then.

The leftist Lula was Brazil’s leader from 2003-2010 and left office with an 87 percent approval rating. But the Workers Party he founded fell hard when Brazilian prosecutors in 2014 began the “Car Wash” corruption investigation and other ones. They are unprecedented probes into corruption, centred on political kickbacks on contracts at state-run firms.

The first conviction blocked Lula, a leftist icon who remains one of Brazil‘s most influential politicians, from running for the presidency last year. Even after he was jailed, polls showed that he would have easily been elected over far-right rival Jair Bolsonaro, who won the presidency.

In recent weeks, he has come under pressure to resign after The Intercept Brasil news website published the first of what it said will be months’ of stories based on leaked private messages between Moro and prosecutors.

Those messages raise serious doubts about Moro’s impartiality as he presided over Lula’s trial. The messages showed him coaching prosecutors on the timing of raids and arrests, asking them to publish press releases to criticise Lula’s defence and sending investigative tips while he was legally obliged to remain impartial.

Based on the messages, Lula’s lawyer Cristiano Zanin argued before the Supreme Court justices on Tuesday that Lula must be freed at once.

“Today, we know that the defence was treated as a mere formality,” Zanin said, referring to Moro’s assistance given to federal prosecutors. “From the beginning of the trial, the prosecution was given favourable treatment.”

In court filings, Zanin said that The Intercept’s reporting “reveal in complete and frightening detail” that Moro breached ethics to convict Lula and keep him from regaining the presidency.

Moro at first said the leaked messages showed no wrongdoing. As The Intercept published more stories, he changed tactics to say he could not verify if the notes were authentic and that he could not recall whether he had sent them.

Lula’s lawyers have for years maintained that Moro was acting out of a desire to block Lula and the Workers’ Party from returning to the presidency. They have repeatedly appealed to the Supreme Court, but all requests have been denied.