The call by the Mothers of Srebrenica association on Friday added to the widespread outrage in Bosnia and Kosovo over the decision to award the Austrian author, who is widely seen as an apologist for the late Serbian President Slobodan Milosevic and a denier of the genocide in July 1995, when Serb forces systematically massacred more than 8,000 Bosniaks. 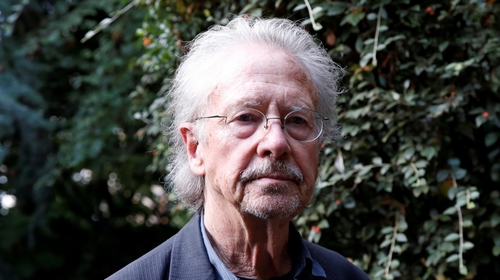 An association comprised of relatives of those killed in the Srebrenica genocide has called for the Nobel committee to revoke Peter Handke’s prize for literature.

Handke was given the Nobel Prize for literature on Thursday “for an influential work that with linguistic integrity has explored the periphery and the specificity of human experience”.

Munira Subasic, president of the Mothers of Srebrenica association, told Al Jazeera that they were offended to hear that a man who “spread hatred and wrote falsehoods” was awarded such a prize.

“Milosevic was his idol – Milosevic, who went down in history as the butcher of the 20th century, who gave the green light for genocide [to be committed] ,” Subasic said.

“What kind of a message is this? Are they sending a message that the Nobel prize is awarded to those who support those who killed Muslims at the end of the 20th century? Is the world this unjust? Does this world hate Muslims this much?”

In less than 24 hours, more than 20,000 people have so far signed an online petition to have Handke stripped of his prize.

‘Stick your corpses up your ar*e’

Handke in 2006 attended the funeral of Milosevic who died while facing trial for charges of war crimes and genocide in The Hague after leading his country’s forces in the 1990s war. His death came before the UN war crimes tribunal could deliver a verdict.

Speaking at the funeral in front of thousands of mourners, Handke sympathised with Milosevic, calling him “a rather tragic man”.

Handke has also accused Bosniaks of staging massacres in Sarajevo, held under siege for 43 months by Serb forces from 1992-1995.

According to an article published in The Irish Times in April 1999, when critics pointed out that the victims’ corpses provide evidence of Serb war crimes, Handke replied: “You can stick your corpses up your ar*e.”

‘All sides do it’

His position regarding the war in Bosnia was that Serbs were unfairly receiving the lion’s share of the blame.

In an article published for the French newspaper Liberation in 2006, Handke wrote that “the expression concentration camps”, which were set up across Bosnia, should not be used.

“It’s true: intolerable camps existed between 1992 and 1995 in the Yugoslavian republics, especially Bosnia,” he wrote.

“But let’s stop automatically connecting these camps to Bosnian Serbs. There were also Croat camps and Muslim camps and the crimes committed here and there will be judged at the tribunal in The Hague.”

Regarding the Srebrenica genocide, he wrote that one should also listen to the survivors of Muslim massacres in Serb villages around Srebrenica.

But journalist Peter Maass, who reported from war-torn Bosnia including from the concentration camps, wrote in an article on Friday that “equating a small number of random crimes with a systemic and massive number is a transparent form of deception and deflection”.

Handke fails to acknowledge that the war was started by Serbs and Milosevic in particular, Maas wrote.

Maass told Al Jazeera that the “all sides do it” argument wasn’t just a “false argument to minimise what the Serbs did and equate it with what they accused the Muslims of doing”.

“It was an argument designed to forestall Western intervention in Bosnia, and it succeeded for several years, until in 1995 there was finally an aerial bombardment by US-led NATO forces that brought on the … Dayton accords,” Maass said.

“The ‘all sides do it’ argument isn’t just a matter of falsely spreading the blame, but crucially it is designed to persuade outsiders to stay on the outside – because all sides are guilty – thereby allowing a genocide to proceed unimpeded.

“This argument was pushed most vigorously by the Serbs, but it was also accepted and repeated by key European and American figures,” Maass said.

Meanwhile, Handke told Serbia’s state TV on Thursday that he felt Serbians’ “happiness because of the big award that I have received”, adding that they will celebrate with “a rakija [brandy] and a glass of white wine”.

He told reporters the recognition gave him “a strange kind of freedom”.

Subasic told Al Jazeera that following the upcoming 25th anniversary of the Srebrenica genocide this July, the Mothers of Srebrenica plan to set up a pillar of shame with names inscribed of all those who organised and supported the genocide as well as the rape of thousands of Bosniak women and girls.

If the Nobel committee refuses to revoke the prize, Handke’s name as well as that of the committee will be inscribed along with Milosevic, Mladic, Karadzic and all the analysts and politicians who supported them, Subasic said.

They will also erect a Pillar of Honour for all those who fought against the impending genocide.

“For 24 years, we mothers have been teaching our children not to hate, not to seek revenge, for our kids to be the best students,” Subasic said.

“How will we now explain to them why this man received the Nobel prize?

“We believe the world is very unjust towards us. Those who support and glorify criminals cannot receive the Nobel peace prize. Instead, people who spread peace, love and tolerance should be awarded,” Subasic said.