Cambodia will send 1,600 tonnes of plastic waste back to the United States and Canada, an official said on Wednesday, the latest Southeast Asian country to signal it will not accept rubbish shipped from Western nations. 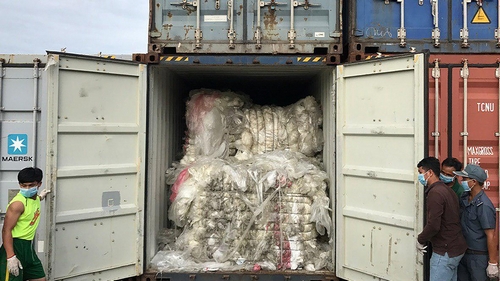 A container opened by officials at Sihanoukville port in Cambodia, was found to contain about 1,600 tonnes of waste plastic [Cambodian Ministry of Environment/AFP]

The rubbish was found a day earlier in scores of shipping containers at the port town of Sihanoukville and will be sent back to its origin, environment ministry spokesman Neth Pheaktra told AFP.

“Cambodia is not a bin for out-of-date technology to be dumped in,” he said.

He said 70 containers full of plastic waste were shipped from the US while another 13 were sent from Canada.

Huge quantities of rubbish have found their way to Southeast Asia but opposition to the trade is growing.

Indonesia announced this month it was returning dozens of containers full of waste to France and other developed nations while neighbouring Malaysia said in May it was shipping 450 tonnes of imported plastic waste back to the countries that sent it.

Around 300 million tonnes of plastic are produced every year, according to the environmental group WWF. Much of it ends up in landfills or polluting the seas.

Why do states allow impunity for torture?