On June 3, gunmen in military fatigues stormed the sit-in outside the military headquarters in Khartoum, shooting and beating pro-democracy protesters who were camped out there for months, initially seeking the removal of President Omar al-Bashir and then demanding that the generals who overthrew him cede power to civilians. 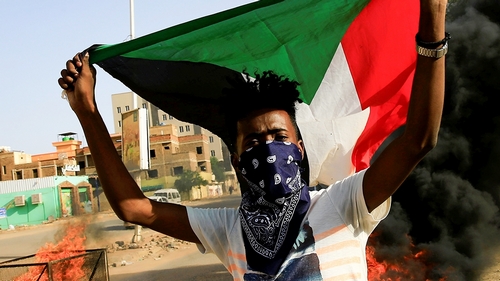 Hundreds of people have rallied in parts of Sudan’s capital, Khartoum, to demand an independent investigation into a deadly June raid on a protest camp after a probe blamed its bloody dispersal on “rogue” military personnel.

More than 100 demonstrators were killed in the raid, according to the protest-aligned Central Committee of Sudanese Doctors, while over 700 others were reported wounded from the attack and subsequent days of violence.

Survivors recounted that the security forces, mostly made up of members from the notorious Rapid Support Forces (RSF), which is led by the deputy head of the ruling Transitional Military Council (TMC), threw bodies into the Nile River near the sit-in.

On Saturday, a joint probe by prosecutors and the TMC said that RSF paramilitaries were involved in the raid along with some members of other security forces. The investigation report said the “rogue” military personnel had acted alone, however.

Fath al-Rahman Saeed, the head of the investigative committee appointed by the public prosecutor, told a news conference in Khartoum that three officers violated orders by moving forces into the sit-in area, the  focal point for the months-long protests that led to al-Bashir’s overthrow on April 11.

Saeed said orders had been given to security forces to clear Columbia, an area near the protest camp where alcohol and drugs – both illegal in Sudan – were known to be sold.

But, he said, an RSF general had separately ordered a colonel to disperse the sit-in, despite having no such order from further up the chain of command.

“They led the forces… inside the sit-in area and ordered them to get down from their vehicles and whip the protesters,” Saeed told reporters.

He identified the RSF general who allegedly ordered the raid by his initials A.S.A., and the colonel as A.A.M. Saeed said an RSF captain, identified as H.B.A, was involved in clearing Columbia but later took part in dispersing the sit-in.

He said another group of security personnel, also involved in clearing Columbia, “disobeyed orders and entered the sit-in area”. They “removed barricades, fired tear gas and fired intense and random bullets that led to the killing and wounding of protesters and the burning of tents,” Saeed said, adding that a total of eight officers were involved in the raid.

The findings of the probe were rejected by protest leaders and demonstrators, with hundreds of people taking to the streets of Khartoum.

“This investigation is meaningless because we know who cracked down on protesters,” protester Amam al-Tahir told The Associated Press news agency.

Khartoum resident Waleed Samy agreed: “I am one of those who was present during the sit-in break up and I am sure 100 percent that the person who was beating me was from the Rapid Support Forces. There is no one else.”

“We have no solution other than to go back to the street,” he added.

The Sudanese Professionals Association (SPA), an umbrella group spearheading the nationwide protests, said it rejected the probe “at the procedural level” itself, adding that the prosecutors had no credibility.

“It [the investigation] was commissioned by the (ruling) military council, this is challenging its integrity as the military council itself is accused in this case,” said the group that first launched protests against ak-Bashir in December.

Demanding an independent probe, the SPA insisted that the accused be identified by their full names, rather than by their initials as mentioned in the prosecutor’s report.

“The commission has come up with flawed and incomplete statistics for martyrs, victims and wounded,” it said.

Echoing these sentiments, opposition representative Ismail al-Taj said: “We have rejected from the start the formation of this investigation committee because it has no credibility and we need an independent committee.

He added: “As to what happened on the 3rd of June… the number of martyrs, the number of wounded and the number of missing persons; the most important thing is to identify the perpetrators of these violations. These are the things the committee has to find.”

Doctors linked to the protest movement say 127 people were killed during the June 3 raid, but Saeed gave a lower toll on Saturday.

He said that 17 people were killed on June 3, while a total of 87 died between that day and June 10.

Days after the raid, rights group Amnesty International said that members of “RSF are responsible for… the ongoing bloody crackdown on protesters in Khartoum since 3 June”.

The sit-in raid caused the collapse of talks between protest leaders and Sudan’s ruling generals, which did not resume until weeks later, after intense mediation by African Union and Ethiopian diplomats.

The two sides have now agreed to form a new joint civilian-military ruling body for a transitional period of 39 months.

This governing body would then install an overall civilian administration as demanded by demonstrators.

Although the generals and protest leaders have signed a power sharing deal, several issues are still pending, including justice for the demonstrators killed since the first December protests against al-Bashir.