Authorities said they were suspending departing and arriving flights at one of the world’s busiest travel hubs after thousands of protesters entered the arrivals halls to stage a demonstration.

Hong Kong airport has suspended all the remaining flights for Monday due to the ongoing pro-democracy protest in its terminal, according to airport authorities.

“Other than the departure flights that have completed the check-in process and the arrival flights that are already heading to Hong Kong, all other flights have been cancelled for the rest of today,” the airport authority said in a statement.

“Airport operations at Hong Kong International Airport have been seriously disrupted as a result of the public assembly at the airport today,” the statement said.

It said traffic on roads to the airport was very congested and car park spaces were full. “Members of the public are advised not to come to the airport,” the statement added. 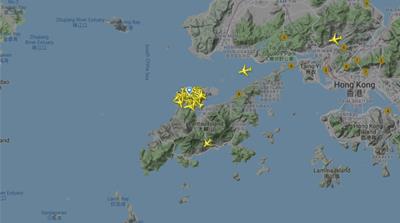 According to Reuters News Agency, the airport authority has said all passengers are advised to leave the airport as soon as possible.

Local media are also reporting that airport staff has been requested to leave the airport as soon as possible, including major airlines like Cathay and Hong Kong Airlines.

Al Jazeera correspondent Rob McBride said that over 5,000 protesters have reportedly descended on the airport.

“Especially significant is the wounding of a girl, at one of the protests, who may well have lost an eye as a result,” he added.

“The protesters have completely taken over the terminal.” 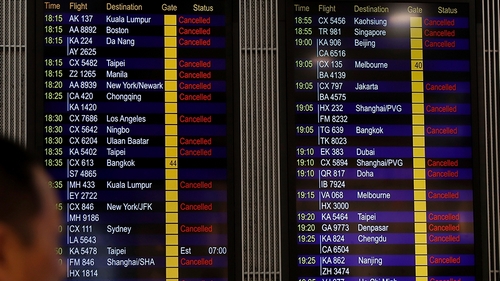 McBride added that the tougher stance of the Hong Kong police on Sunday was very different from most of the previous weeks.

“Possibly, it was a way or trying to scare people into not coming out, not taking part in illegal activities. If that is the case, they maybe they may have to think again,” McBride said about

Increasingly restive protests for over two months have plunged Hong Kong into its most serious political crisis in decades and presented a serious challenge to Beijing.

The protests, which started over a controversial extradition bill, expanded into wider calls for democratic reforms and an independent inquiry into police conduct during the demonstrations.

Over the weekend, as demonstrators threw up barricades across the city, police shot volleys of tear gas into crowded underground train stations for the first time, and fired bean-bag rounds at close range.

Scores of protesters were arrested, sometimes after being beaten with batons and bloodied by police. Police have arrested more than 600 people since the unrest began.

In a response to those skirmishes, Chinese authorities said the protesters in Hong Kong were taking part in “terrorism”, AFP news agency reported. 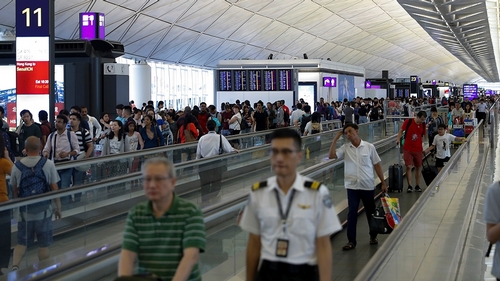 Meanwhile, in Hong Kong’s neighbouring city Shenzhen, the Chinese People’s Armed Police has been gathering for what Chinese media are calling an excercise.

Video obtained by the Global Times shows columns of armoured personnel carriers and other vehicles rolling into the city, which is located only about 30km from Hong Kong.

Hong Kong, a former British colony, was returned to China in 1997 under a “one country, two systems” principle.

Under Chinese rule, Hong Kong has been allowed to retain extensive freedoms, such as an independent judiciary, but many residents see the extradition bill as the latest step in a relentless march towards mainland control.

The protests are the most serious political crisis in Hong Kong since it returned to China 22 years ago.