Amnesty International has called on Egyptian authorities “to immediately end cruel and inhume conditions” of political detainees, who have been on hunger strike at a notorious maximum security prison in Cairo.

In a statement published on Wednesday, the international right group urged authorities to investigate allegations of torture and other abuses against prisoners at al-Aqrab prison in Tora, just south of the Egyptian capital.

An estimated 130 detainees have been on hunger strike for more than six weeks inside the prison known as the Scorpion.

In total, about 1,000 political detainees have been jailed at al-Aqrab following sweeping crackdown on dissent in recent years.

According to the Amnesty report as well as Egyptian human rights groups, the detainees are deprived of their basic rights such as family visits and medical care.

Many of the detainees on strike are on trial in the military courts for an alleged attempt to kill the assistant attorney general in 2017. They are also accused of being members of an “outlawed organisation”, a term used to describe the Muslim Brotherhood. 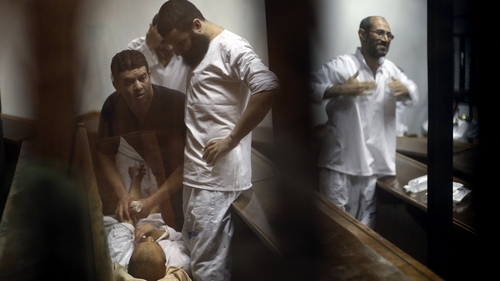 “The combination of squalid and inhumane detention conditions and the denial of family visits and access to their lawyers … has created an unbearable situation for detainees,” Magdalena Mughrabi, Amnesty’s Middle East and North Africa deputy director, said.

Egyptian human rights groups also said that the government is in engaged in “deliberate human rights abuses”, describing as “illegitimate” the trial of the political detainees in a military court.

The groups say some prisoners were banned from having family visits for over a year.

“Egypt is no longer a country that respects the law or the constitution. We as an organisation demand the government to respect the rule of law and end its arbitrary justice system.”

Khalaf Bayoumi, the head of al-Shahab, another Turkey-based  human rights organisation that monitors abuses in Egypt, urged the government of President Abdel Fattah el-Sisi to try the defendants in a civilian court.

According to letters published on social media, the detainees demand to have family visits, end of torture, the right to exercise, fresh air and sunshine – all of which they have been prohibited from having for three years.

“What happens in Egypt today is worse than what happened during [former President Hosni] Mubarak days,” Gamal Gasim, a political science professor at Grand Valley State University in Michigan, added.

“Egypt went from being the engine of the Arab world that pioneered culture, innovation and grand ideas into a draconian dark place hostile to democratic ideals and human rights,” he said.

Sisi has repeatedly denied allegations of rights abuses in his country under his watch.

In an interview with the US broadcaster, CBS in January Sisi was quoted as saying that there were no political prisoners in his country.

“Whenever there is a minority trying to impose their extremist ideology, we have to intervene regardless of their numbers.”