India’s Supreme Court will look into accusations that a powerful regional politician threatened the family of a teenager who accused him of rape, the country’s chief justice said, stepping into a case that has triggered outrage. 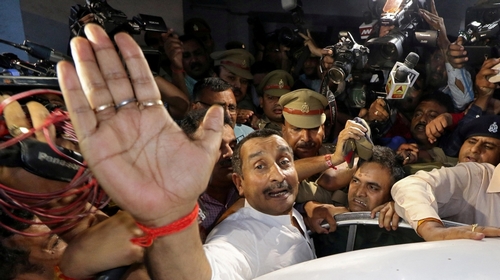 The 19-year-old woman is fighting for her life in hospital after the car she was in was smashed by a truck in her northern home state of Uttar Pradesh on Sunday, killing two of her aunts and severely injuring her lawyer.

It was the latest tragedy to befall her family since she accused Kuldeep Singh Sengar from the ruling Bharatiya Janata Party (BJP) of raping her at his home in Unnao district of Uttar Pradesh, India’s most populous state, in 2017.

Weeks before the collision, the family wrote a letter to the Supreme Court saying they faced threats to their lives from the legislator she accused, and the chief justice said he would look into the matter.

“We [will] try to do something constructive in the midst of this highly destructive volatile environment,” Chief Justice Ranjan Gogoi said in the court on Wednesday.

Gogoi also asked for a status report on the case, and is expected to look into the matter further on Thursday.

The rape case and the car crash are already being investigated by the Central Bureau of Investigation (CBI), a national agency, amid fears the local police may be influenced by the BJP politician.

The state legislator, Sengar, has denied the accusation of rape and any involvement in the car crash that has brought the case back into the public spotlight.

Sengar was charged under India’s strict child protection laws in 2017 as the woman was a minor when she was attacked.

Nationwide protests led to the case being handed over to federal investigators who arrested Sengar in April 2018. He is currently in jail awaiting trial.

The case has been an embarrassment for Prime Minister Narendra Modi’s party, which is in power in the state and nationally.

Opposition leaders accuse the BJP of protecting Sengar after the case stirred public attention in 2018, when the woman tried to kill herself, saying police had refused to take her complaint.

“I hope the victims will now get justice,” said Mayawati, a former chief minister of the state and the leader of a major regional party, welcoming the Supreme Court’s intervention.

I hope @BJP4India takes swift action to oust #KuldeepSengar. Glad that he is in jail, but the BJP does not need tainted dalbadlus like him who have no ideology except power and are accused of heinous crimes like rape!

Reuters news agency reviewed a copy of the family’s letter that said Sengar’s relatives and associates had twice threatened grave consequences in July if they pursued the matter.

Modi, whose party won the last general elections by a landslide in May after a campaign that promised greater attention to women’s safety, including swift investigation and trial for rapes, has not commented on the case.

On Wednesday, several opposition parties walked out of the lower house of parliament to protest against the government’s silence on the case.

Many have also called for Sengar’s expulsion from the BJP amid the latest allegations.

Yes he was in Congress before. Also why keep someone who is accused of rape, and attempt to murder in party? It will be in interest of rule of law that he is removed. #KuldeepSengar https://t.co/N4LAuT1BYB