The announcement on Monday from Iran’s Atomic Energy Organization came amid growing frustration in Tehran over a failure by the landmark accord’s remaining signatories to deliver on its promised economic benefits. 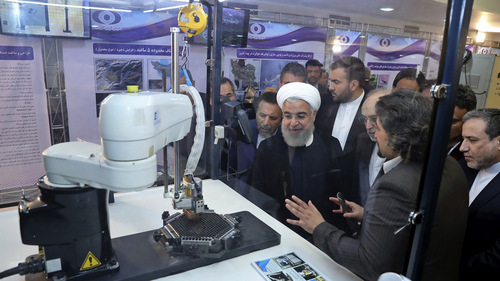 Iran has passed the uranium enrichment cap set in its 2015 nuclear deal, marking the second time in a week that it made good on a promise to reduce compliance with the international pact following the United States’s unilateral exit last year.

Iran has already passed the uranium stockpile limit permitted by the deal, and officials on Sunday pledged to keep scaling back their commitments every 60 days unless Britain, China, France, Germany and Russia protected it from the punishing sanctions imposed by the US following its withdrawal.

A day after US officials threatened Iran with further “sanctions and isolation”, some of the pact’s other parties hit out at Washington for escalating the crisis that has thrown into question the future of the accord, which offered Iran relief from sanctions in exchange for drastic limits on its nuclear programme.

“The maximum pressure exerted by the US on Iran is the root cause of the Iranian nuclear crisis,” he said.

Moscow also blamed Washington and pledged to pursue diplomatic efforts to salvage the deal, with Dmitry Peskov, Kremlin spokesman, saying on Monday: “Russia aims to continue dialogue and efforts on the diplomatic front.

“Russia and President [Vladimir] Putin warned of the consequences that would be imminent after one of the countries decided to end its obligations and exit the deal.”

In Tehran, Abbas Mousavi, spokesman for Iran’s foreign ministry, said that while Iran appreciated the efforts of some nations to save the deal, it has “no hope nor trust in anyone nor any country”.

“But the door of diplomacy is open,” Mousavi told reporters on Monday, adding that Emmanuel Bonne, a senior aide to French President Emmanuel Macron, was scheduled to visit the Iranian capital in the coming days.

He also issued a stark warning to the pact’s European signatories – Germany, France and the United Kingdom – about the second 60-day deadline Iran set on Sunday.

“If the remaining countries in the deal, especially the Europeans, do not fulfil their commitments seriously, and not do anything more than talk, Iran’s third step will be harder, more steadfast and somehow stunning,” he said, referring to the September 5 deadline.

Behrouz Kamalvandi, a spokesman for Iran’s nuclear agency, separately hinted in a state television interview aired on Monday that the country might consider going to 20 percent enrichment or higher as its third step, if the material was needed.

Under the deal, the cap for enrichment was set at 3.67 percent, a level that is enough for power generation but is far below weapons-grade levels of 90 percent.

Kamalvandi also suggested using new or more centrifuges, which are limited by the deal.

Iran says its recent measures to increase enrichment beyond the 3.67 percent cap and stockpile uranium beyond the 300kg limit could be reversed within “hours” if the pact’s signatories shielded it from the US sanctions, particularly those on its oil and banking sectors.

How an incident displaced 600 refugees