The Lebanese army says it has fired at two of three Israeli drones in southern Lebanon after they violated Lebanese airspace, as tensions mount between the neighbours. 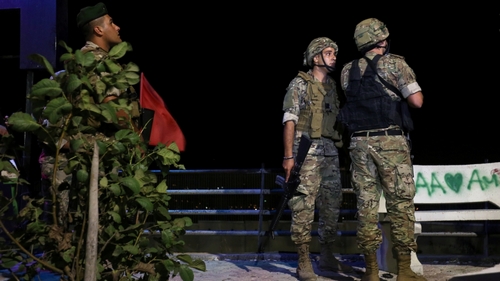 An Israeli drone “violated Lebanese airspace at 19:35 and hovered above a Lebanese army position” in the border village of Adaisseh and returned to Israel after shots were fired, the army said in a statement on Wednesday.

A second drone returned to Israel without being fired at after entering over Kfar Kila, also a border village. The army then fired at a third one which also returned back to Israel, it said.

You can hear voice of a woman in background telling kid to “come here…they’re shooting on a plane”: pic.twitter.com/ecWoUPzmU8

Later on Wednesday, the Israeli army said its drones “completed their mission and no [Israeli military] damage was reported”.

“Approximately an hour ago, shots were heard from Lebanese territory towards an air space in which [Israeli military] drones were operating,” the Israeli army statement said, without responding to Lebanon’s allegations that the drones had violated the country’s airspace.

Beirut has repeatedly complained to the United Nations about Israel, which Lebanon considers an enemy country, breaching its airspace.

On Tuesday, the Lebanese Higher Defence Council said that the Lebanese have the right to defend themselves by any means necessary to stop any Israeli attacks.

The incident came just days after an alleged Israeli drone crashed in a Hezbollah-dominated suburb in southern Beirut while another exploded and crashed nearby. The Lebanese group Hezbollah called it an act of aggression and promised to retaliate against the attack.

The Lebanese army and government officials have also described the drone crash incidents as an attempted attack and violation of sovereignty and asserted Lebanon’s right to self-defence.