The United States has imposed sanctions on Iranian Foreign Minister Mohammad Javad Zarif, the US Treasury Department’s Office of Foreign Assets Control said on its website. 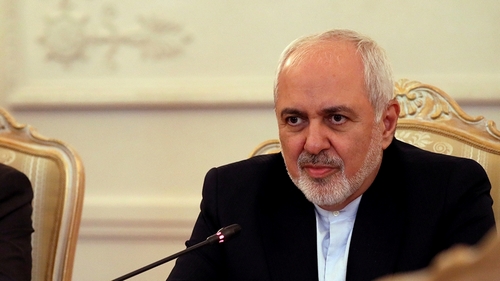 Iranian Foreign Minister Mohammad Javad Zarif is the target of latest US sanctions on Iran as tensions rise between the two countries [File: Evgenia Novozhenina/Reuters]

The Treasury Department said on Wednesday that it was imposing sanctions on Zarif for acting on behalf of Iranian Supreme Leader Ayatollah Ali Khamenei.

“Javad Zarif implements the reckless agenda of Iran’s Supreme Leader, and is the regime’s primary spokesperson around the world,” Treasury Secretary Steven Mnuchin said in a statement.

Zarif brushed off the sanctions on Twitter, saying the US move indicates Washington sees him as a “threat”.

“It has no effect on me or my family, as I have no property or interest outside of Iran,” he said.

The US’ reason for designating me is that I am Iran’s “primary spokesperson around the world”
Is the truth really that painful?
It has no effect on me or my family, as I have no property or interests outside of Iran.
Thank you for considering me such a huge threat to your agenda.

The announcement of the sanctions against Zarif comes as the US extended for another 90 days waivers allowing foreign firms to work at Iranian nuclear facilities without penalties.

“The peak of stupidity and inconsistency of America’s leaders is at a point where they don’t recognise Dr Zarif as being influential in Iran’s policy but with the ultimate ignorance they sanction him! The Americans have a strong fear of the logic of Dr Zarif and his negotiating skills,” Mousavi wrote on social media.

Al Jazeera’s Dorsa Jabari, reporting from Tehran, said that the latest move was seen in Iran as a reflection of the US’s inability to understand “how the Iranian system works”.

“The idea that by sanctioning the foreign minister, that they will get to deal with a more powerful person in the system to talk to is really absurd,” she said.

The Trump administration said it would make decisions on whether to grant Zarif a travel visa, including for trips to the United Nations, on a case by case basis, holding open the possibility that he might attend the annual UN General Assembly in September. Zarif last visited the UN in New York earlier this month.

A senior US official reiterated that Trump was open to talks with Iran, but said the administration did not consider Zarif to be a key decision-maker.

Al Jazeera’s Rosiland Jordan, reporting from Washington, DC, said the sanction “is another step in the US ‘maximum pressure’ campaign against Iran.”

Tensions have escalated between the two countries since Trump withdrew the US from the 2015 nuclear deal and reimposed sanctions on Iran.

Fears of a direct US-Iranian conflict have risen since May with several attacks on oil tankers in the Gulf, Iran’s downing of a US surveillance drone, and a plan for US air raids on Iran last month that Trump called off at the last minute.

On Wednesday, Zarif said that Iran may cut its commitments under the international nuclear deal further unless European partners move to protect it from US sanctions by ensuring it can sell oil and receive income.

Zarif also said Tehran was ready to negotiate with rival Saudi Arabia. He said, however, US Secretary of State Mike Pompeo was not welcome in Iran.

On Monday, Pompeo tweeted: “We aren’t afraid of [Zarif] coming to America where he enjoys the right to speak freely. Are the facts of the [Khamenei] regime so bad he cannot let me do the same thing in Tehran?” he said, referring to Supreme Leader Ali Hosseini Khamenei.

“What if his people heard the truth, unfiltered, unabridged?”

Meanwhile, in an interview with Al Jazeera, Trita Parsi, executive vice president of the Quincy Institute, a US think-tank, said that the decision makes it “much, much more difficult” for the Trump administration to talk to Iran.

“I think it is quite erroneous to still discuss the intensions of the Trump administration as aimed at securing diplomacy. If you sanction the top diplomat of the other side, you are signalling that you are not looking for diplomacy.”

“If the US and Iran cannot talk, that increases the likelihood of military confrontation, which is the explicit desire of John Bolton, the national security adviser,” Parsi said.

He said the US notion that “maximum pressure” would force Iran to cave in “has been disproven over and over again.”

“If there is anything that would get the Iranians to illicit flexibility, it would be flexibility shown by the American side. That’s what got the Iran nuclear deal in the first time.”