Hundreds of Israeli troops, accompanied by bulldozers, have begun demolishing homes in the Palestinian village of Sur Baher despite Palestinian protests and international criticism.

Residents of the village’s Wadi al-Hummus neighbourhood told local media on Monday that 16 residential buildings, which hold around 100 apartments, were being targeted.

“Preparations started past midnight as hundreds of armed Israeli occupying soldiers/ bulldozers stormed the town. Families threatened with demolitions were woken up/ moved out of their homes,” read a tweet by the Palestinian Liberation Organization (PLO).

The Israeli military considers the homes, which are close to an Israeli separation wall that crisscrosses the occupied West Bank, a security risk.

The Israeli Supreme Court ruled in favour of the military last month, ending a seven-year legal battle, and set Monday as the deadline to knock down the homes. Palestinians say the act will set a precedent for other towns along the route of the barrier, which runs for hundreds of kilometres around and through the occupied West Bank.

“We heard very loud bangs coming from a building right next door to where we are now. It was from a large mechanical digger that was ripping off part of the roof of a building that was home up until this morning to two families,” he said.

“The father of one of the families has been sitting on a chair in the street watching his home being torn apart.”

The sprawling village of Sur Baher straddles the line between occupied East Jerusalem and the occupied West Bank. It was captured and occupied by Israel in the 1967 war.

Matheson said Israeli forces have levelled a building in the West Bank side and destroyed 50 percent of a home belonging to a Palestinian family of 10 the East Jerusalem side.

“In the early hours of the morning, while it was still dark, Israeli forces moved into the house and removed the family. They took the family away – we heard screaming and shouting. And within two hours, 50 percent of the building has been destroyed.”

The demolitions marked a “very sombre and sad day” for Palestinian residents, he said.

‘I am losing everything’

Israeli Internal Security Minister Gilad Erdan said the residents “are making their own law” by constructing these buildings.

“There are hundreds of illegal structures,” he told Israel’s Army Radio.

“To my regret there is no sufficient governance there. But it is not just that there are hundreds of structures there – several dozens of them sit almost on the route of the separation fence, endangering the security forces that operate there.” 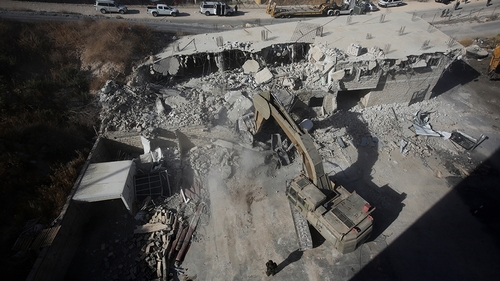 But Palestinians accuse Israel of using security as a pretext to force them out of the area as part of long-term efforts to expand settlements. All settlements on occupied Palestinian lands are illegal under international law.

They also point out that most of the buildings in Wadi al-Hummus neighbourhood are meant to be under the Palestinian Authority and civilian control under the 1993 Oslo Accords.

“I built this house stone by stone. It was my dream to live in this house. Now I am losing everything,” said Fadi al-Wahash, 37, his voice breaking as a bulldozer destroyed his unfinished three-floor house.

“I had a permit to build from the Palestinian Authority. I thought I was doing the right thing,” he said.

“What is happening today is a mass displacement of the people living in Wadi al-Hummus, despite the legal and diplomatic attempt to protect their property,” Ali al-Obeidi, the chairman of the Wadi al-Hummus Committee told local Maan news agency.

Dalia Qumsieh, a lawyer from the Palestinian rights group Al Haq, told Al Jazeera that since the beginning of the Israeli occupation, the state has “always maintained these policies of the destruction of Palestinian property and homes throughout the occupied Palestinian territories and on both sides of the Green Line”.

“The case of Sur Baher represents the physical translation of the culture of impunity that prevails,” she said, speaking from the occupied West Bank city of Ramallah.

Qumsieh said the demolitions are part of “a multi-layered situation of mass human rights violations” which includes the unjustified military destruction of property, the forcible transfer of Palestinians, the separation wall itself, and finally, the violation of Palestinian sovereignty and the absolute right to self-determination.

“States who fail to respect their obligations as set forth under international law must consider how they can take practical steps to prevent this from happening on a much larger scale,” Qumsieh continued. “They must also ask themselves how they can activate their political wills in favour of establishing a counter-culture of impunity, a culture that respects the rule of law and international law.”

Translation: The biggest demolition act in occupied Jerusalem since 1967. The Israeli occupation legalised the demolition of 16 residential buildings in Wadi al-Hummus area in Sur Baher.

Residents said they would be made homeless.

“When the house is demolished, we will be in the streets,” Ismail Abadiyeh, 42, who lives in one of the buildings under threat with his family, including four children, told the diplomats last week. 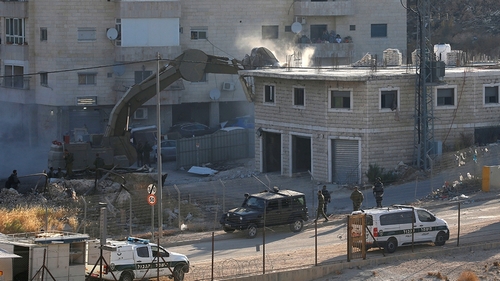 Jamie McGoldrick, the United Nations humanitarian coordinator, and other UN officials called on the Israeli authorities last week to halt the demolition plans. They said 17 Palestinians faced displacement from the plans to level the buildings.

More than 350 others “risk massive property loss,” the statement said.

Palestinian officials say the threatened structures lie within areas that they should control. The buildings were all originally given permits and authorisation by the Palestinian Authority, which administers that part of the neighbourhood.

But the Israeli Supreme Court said that the structures violated a construction ban, adding that buildings close to the barrier could provide cover for attackers.

Israeli forces cut through the wire fence near the village early on Monday, allowing them easier access to the buildings. Floodlights lit up a partly constructed multi-storey building as dozens of vehicles brought helmeted police and soldiers into the area.

After first light, mechanical diggers began destroying a two-storey house as soldiers moved through several floors of a partly constructed multi-storey building nearby.

They were filmed and photographed by Palestinian, Israeli and international activists who had mobilised to try and stop the demolition. 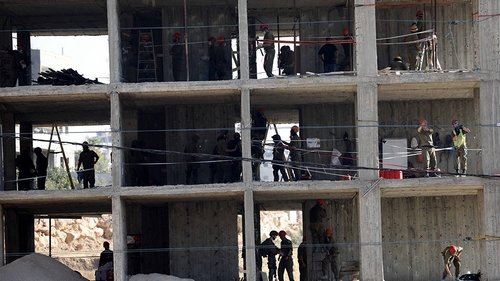 “Since 2am they have been evacuating people from their homes by force and they have started planting explosives in the homes they want to destroy. There are hundreds of soldiers here,” said Hamada Hamada, a community leader in one of the threatened areas.

The Palestine Liberation Organization (PLO) issued a statement accusing the Israeli Supreme Court of aiming “to set a precedent to enable the Israeli occupying forces to demolish numerous Palestinian buildings located in close proximity” to the wall.

The European Union issued a statement saying: “The continuation of this policy undermines the viability of the two-state solution and the prospect for a lasting peace.”

Israel credits the separation wall – projected to be 720km long when complete – with stemming Palestinian suicide bombings that peaked in 2002 and 2003.

Palestinians call it a land grab designed to annex parts of the West Bank, including Israeli settlements.

In some areas of Jerusalem and the West Bank the wall is a high concrete wall, but in Sur Baher it consists of two wire fences separated by a military patrol road and protected by watchtowers and electronic sensors. 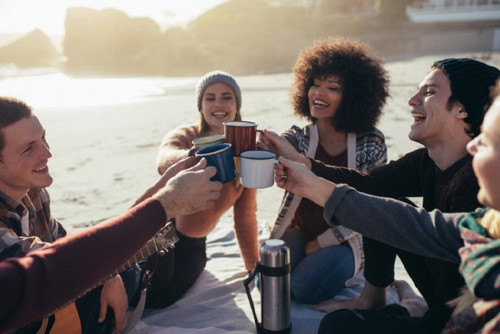 North Korea Obtained 11,000 Bitcoins, Uses Them to Get Around US Sanctions