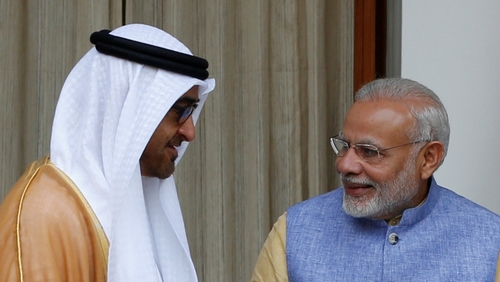 Prime Minister Narendra Modi was announced as the recipient of the prize in April [File: Adnan Abidi/Reuters]

Modi was awarded the Order of Zayed medal by the UAE’s crown prince, Sheikh Mohammed bin Zayed Al Nahyan, known by his initials MBZ, during a visit to the capital Abu Dhabi on Saturday, reinforcing ties between the two countries.

MBZ personally put the gold medal around Modi’s neck, with a portrait of Sheikh Zayed bin Sultan Al Nahyan, the UAE’s first president after whom the order is named, displayed behind them.

The two men shook and held hands for a moment and spoke quietly. “You deserve it,” MBZ told the Hindu nationalist leader at one point while posing for photos.

Modi had been announced as a recipient of the prize in April, days before winning re-election, in a tweet from MBZ.

“We have historical and comprehensive strategic ties with India, reinforced by the pivotal role of my dear friend, Prime Minister Narendra Modi, who gave these relations a big boost,” said a tweet from his account.

India, the world’s third-largest consumer of crude oil, is home to a rapidly growing consumer market and labour pool that the oil-rich Gulf state relies on for its economy.

But the award came as Modi’s government maintains tight security restrictions in Indian-administered Kashmir after stripping the region of its special autonomy.

Through a presidential decree on August 5, India revoked a decades-old special status – which granted the rights to Kashmir to make its own constitution and the autonomy to make laws – and deployed thousands of troops to the region.

The Himalayan valley has been under a sweeping military curfew since then that has seen thousands arrested and residents cut off from all communication and the internet.

The UAE’s ambassador to India, in particular, referred to Kashmir as an internal issue for India.

“With several Gulf states in an ever-tightening embrace with Modi, human rights have been discarded in favour of economic opportunities,” wrote Samah Hadid, a Beirut-based human rights advocate.

“India has not only escaped international condemnation for its actions, it is even shoring up support from Muslim allies,” she added. “The plight of Kashmiris will not only be silenced by India’s clampdown but also the apathy of those who long claimed to speak for them.”

In an open letter to MBZ, British parliamentarian Naz Shah from the Labour party asked him to reconsider giving the award due to the “brutality” she described Modi as directing.

“I ask you to question this decision and reconsider giving such an award, not only because the majority of the Kashmiri people share the same faith as you, but because we have a duty as human beings to stand up against the disregard of human rights and evil,” Shah wrote.

Modi is due to travel to Bahrain later on Saturday, becoming the first Indian prime minister to visit the island nation.