The first woman to wrestle in a hijab, a headscarf worn by some Muslim women, she captured her maiden championship in Malaysia Pro Wrestling and has recently performed in the Philippines.

At 19, Nor “Phoenix” Diana has only been performing for three years but has already made a significant impact in the world of professional wrestling.

“I have a goal to wrestle in WWE,” she told Al Jazeera, referring to World Wrestling Entertainment. “I think I can bring something to the wrestling industry. I want people to see me as a wrestler, and not just as some Muslim hijab girl.

“I started watching wrestling when I was 14 with my father and little brother as they were fans. I eventually became a fan too, and started thinking, ‘Hey, I want to do that one day,’.”

When she finished high school in 2016, she started searching for a place to get her in-ring training under way.

She enrolled in a wrestling school in the Kampung Baru, a Malay enclave in central Kuala Lumpur.

But not everyone at home was comfortable with her ambitions.

“My dad has always been supportive, but my mum doesn’t really support me. I’m her youngest daughter,” she said. “She knows wrestling has a high risk, and is afraid that I’ll get injured easily.”

Despite her concerns, Nor’s mother didn’t stand in the way. 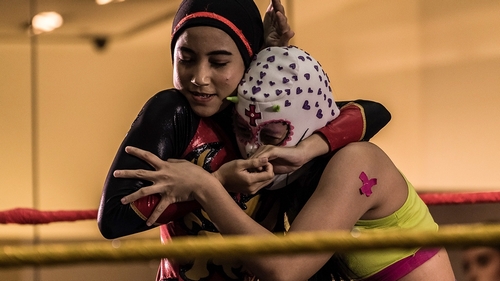 Some people on social media have criticised Nor, saying Muslim girls should not be wrestling [Courtesy of Fight Sport Manila]

Nor’s coaches were so impressed with her acrobatic style that she debuted in the ring two months after starting her training.

Initially, reluctant to wrestle in the standard hijab, Nor, five feet tall and weighing less than 50kg, wore a mask to accommodate her religious beliefs.

“When I started I was always worried that I don’t belong in wrestling as I wear a hijab. I was worried what people would say about a Muslim girl wrestling. But I always trained in my scarf, and I started feeling more comfortable and confident, and decided to wear it to the ring. My bosses were really supportive of my decision.”

Some people on social media have criticised her, saying Muslim women should not be involved in rough sports.

But on the whole, her choice hasn’t hindered her progress.

I can totally see her making it to WWE. Can you imagine the influence she would have on a global stage like that? I’m rooting for her, I really am.

That’s not surprising to Malaysian sports commentator Abu Bakar Atan, who said that, within the Malaysian context at least, a woman wrestling in a hijab is not something out of the ordinary.

“It is not uncommon in Malaysia, where a number of female athletes wearing hijab have had a lot of success locally and internationally. For example, Aifa Azman is the British Open junior squash champion, while Siti Rahmah Mohamed Nasir is a multi-time silat martial arts world champion.

“The number of female athletes wearing the hijab is notable in Malaysia these days as they practice their religious belief without much issue. It’s not a social taboo.”

Nor hopes her example will encourage more girls to take up wrestling and other sports.

Malaysian wrestling fan Eli, a 27-year-old who also wears hijab, said Nor is an already inspiration.

“She is so young and she is already a champion. That inspires me to follow my dreams, and follow my passion,” she told Al Jazeera. “It’s not just me. What she is doing helps women’s empowerment and helps veiled women in Malaysia to strive for their goals.”

In the US market, female players in the mainstream wrestling scene compete in lavish and often revealing ring gear.

However rather than this being an issue, Nor’s look will help her stand out, said Ring Magazine reporter Ryan Songalia.

“The worst thing that could happen to a wrestler is to be forgettable,” he said. “There was probably a time when her look might have been a hurdle, but I think that time has passed.

“Major companies like WWE have a more diverse roster than ever before. And the business has gone global in a way that opens many new markets, so it’d be an asset to a US-based company looking to tap into those new audiences.” 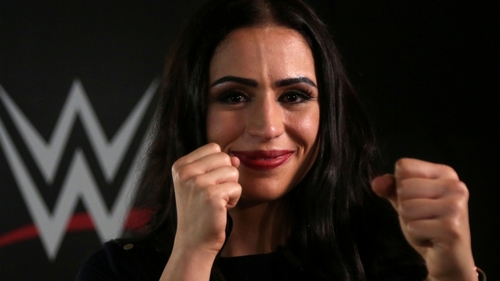 Shadia Bseiso, who was signed by World Wrestling Entertainment Inc. as its first female performer from the Arab world, gestures during an interview with Reuters in Dubai, UAE October 15, 2017 [Satish Kumar/Reuters]

In 2017, Shadia Bseiso, a Jordanian, became the first Arab woman to sign with WWE.

Nor has already received support from within the WWE locker room.

WWE Superstar Ali, an American of South Asian heritage whose real name is Adeel Alam, told Al Jazeera that he was “beyond impressed” with Nor and believes she has a bright future.

“She’s breaking down barriers. She’s inspiring athletes across the globe that a hijab doesn’t limit or define them. She’s ‘normalising’ the hijab,  something many people don’t understand. I can totally see her making it to WWE,” he said. “Can you imagine the influence she would have on a global stage like that? I’m rooting for her, I really am.”

Back in Kuala Lumpur, Nor knows she still has some way to go before making it to the elite level.

In the meantime, she remains focussed on refining her skills and raising the profile of pro-wrestling in Southeast Asia.

But if she continues on her current trajectory, it’s difficult to see anyone stopping the Phoenix from rising. 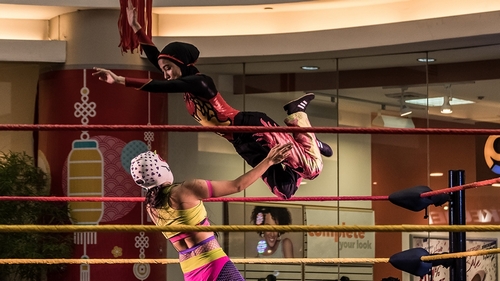