Preparations for a major military operation in northeast Syria are complete, Turkey announced on Tuesday after the United States started pulling back troops and opened the way for a Turkish attack on Kurdish-led forces long allied to Washington. 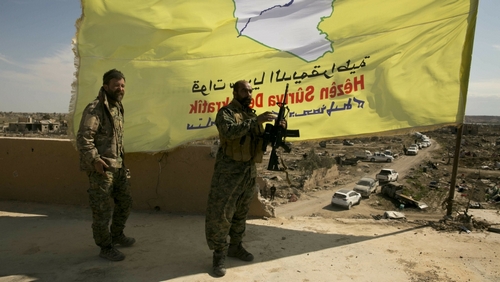 But US President Donald Trump warned he would “obliterate” the NATO ally’s economy if it took action in Syria that he considered “off limits” following his decision on Sunday to pull 50 American special forces troops from the border region.

The US withdrawal will leave its Kurdish-led partner – the Syrian Democratic Forces (SDF) – vulnerable to an incursion by Turkey’s military, which brands them “terrorists” because of their links to Kurdish fighters who have waged a decades-long resistance inside Turkey.

Turkey’s armed forces “will never tolerate the establishment of a terror corridor on our borders. All preparations for the operation have been completed”, the defence ministry said on Twitter early on Tuesday.

“It is essential to establish a safe zone/peace corridor to contribute to our region’s peace and stability, and for Syrians to achieve a safe life,” it said.

Turkey’s vice president said his country will not bow to threats over its Syria plans. “Where Turkey’s security is concerned, we determine our own path but we set our own limits,” Fuat Oktay said in apparent response to Trump’s comments.

Gabriel Keno, a SDF spokesman, said the militia was ready to take on Turkish forces.

“Threats made by Turkey to attack the area is not something new, they have constantly done it for years. We as Syrian Democratic Forces take the matter into account and are fully prepared to fiercely respond to any imminent attack on Syrian soil,” Keno told Al Jazeera.

Reporting from Akcakale along Turkey’s border with Syria, Al Jazeera’s Charles Stratford said Turkish troops and heavy weaponry were on the move on Tuesday.

“There’s a lot of tension here. There are huge concerns about the security ramifications this operation could have,” said Stratford. “It’s very difficult to predict when any military operation might start.”

Trump’s warning on Turkey’s economy appeared aimed at placating critics who accused him of abandoning the Syrian Kurds by pulling out US forces.

“As I have stated strongly before, and just to reiterate, if Turkey does anything that I, in my great and unmatched wisdom, consider to be off limits, I will totally destroy and obliterate the economy of Turkey,” Trump tweeted.

“What this shows is that President Trump – unlike all his predecessors whether Republican or Democrat – is only concerned about himself. We have a moral responsibility to the Kurds because without them we would not have destroyed the caliphate.”

“Turkey is determined to clear terrorists from the east of the Euphrates and protect its own security and survival while implementing a secure zone in order to achieve peace and stability,” Aksoy said in a statement.

A Trump administration official, briefing reporters on a conference call, said 50 American troops in the region that Turkey has targeted would be redeployed elsewhere in Syria “where they aren’t in the crossfire”.

Joshua Landis, a Syria analyst from the University of Oklahoma, said Trump’s move was the latest to throw American foreign policy into disarray.

“This shows a real collapse of the foreign policy process in the White House … People are guessing what America will do next. This is clearly not good,” he said.

Landis said Trump clearly wants to end US involvement in Middle East wars, but his understanding of the complex situation on the ground is lacking.

“The trouble is he knows very little about the long history between the Kurds and Turkey. He doesn’t realise how brutal the Turkish army will be once it gets among the Kurds,” he told Al Jazeera.

“Zarif voiced opposition to military action” and “urged respect for Syria’s territorial integrity and national sovereignty”, he was quoted as saying in a foreign ministry statement issued late Monday.

The Iranian foreign minister also “stressed the need for the fight against terrorism and for the establishment of stability and security in Syria”.

Zarif told Cavusoglu the Adana agreement was “the best approach for Syria and Turkey and for addressing their concerns”.

Ankara and Damascus signed the agreement in 1998 to ease tensions after Turkey threatened Syria with military action if it did not expel Turkish-Kurdish rebel leader Abdullah Ocalan from its soil.

Cavusoglu said the Turkish operation in northeast Syria “would be temporary”, according to the statement.

The US worked closely with the YPG to recapture swathes of territory from the Islamic State of Iraq and the Levant (ISIL or ISIS).

The feared Turkish invasion of northeast Syria could prompt an ISIL resurgence, analysts and Kurdish forces warned, despite Ankara’s pledge to prevent the fighters’ return.

“The fact is that ISIS is still a threat, one that seems likely to metastasise if the SDF is forced to divert attention and resources … to a defensive battle against Turkey,” said Sam Heller of the International Crisis Group think-tank.

While a Kurdish-led operation earlier this year saw the death of ISIL’s territorial gains, the organisation is not dead and sleeper cells have been active in SDF-held areas and in Syria’s vast desert, where it continues to hit Syrian government forces with deadly attacks and ambushes.

The US military has warned that, short of sustained international pressure, ISIL would soon have the ability to regroup.

“The battle against IS is not over,” said Abdulkarim Omar, the top Kurdish foreign affairs official. “There are hundreds of sleeper cells in recently liberated areas.”

The SDF is now concerned the armed group could replenish its ranks by freeing thousands of fighters and their families currently held in detention centres and informal settlements in Syria’s northeast.

The Kurds consistently warned they would be unable to guard ISIL fighters if their forces were busy fighting off a Turkish offensive.

On Monday, Omar noted detention centres are not heavily fortified.

“They are only buildings … In the event of any security vacuum, these criminals could have an opportunity to break free,” he said.

Omar also said he was concerned about displacement camps – namely al-Hol, the largest of the settlements, which he described as a “time bomb”.

Security incidents have been on the rise in the crowded camp, which houses more than 3,000 ISIL families among its more than 70,000 residents, according to the Kurdish administration in northeast Syria.

The thousands of foreign ISIL brides held in al-Hol are “as dangerous” as the thousands of ISIL fighters held in SDF detention centres, it said this week, noting daily killings, stabbings, and attempts to break free.

The Institute for the Study of War last week said ISIL is bribing prison guards and raising funds to smuggle women out of camps, including al-Hol.

“ISIS is likely preparing more coordinated and sophisticated operations to free its detained members,” it said in a report citing incidents in which prisoners and ISIL wives managed to break free.

Turkey, however, said on Monday it would not allow ISIL “to return in any shape and form”.

“Turkey will not intentionally target camps and prisons but it could inadvertently strike them in the process of intervention,” Syria analyst Samuel Ramani said.

Heller also said a direct Turkish attack on camps and prisons was unlikely.

“What seems more likely is that these facilities, which are already vulnerable to riots and attempted jailbreaks, will be left vulnerable as the SDF redeploys the forces securing them to fight Turkey,” he said.

“If ISIS cadres escape in the ensuing chaos, they could catalyse ISIS operations locally. Or, if they flee the Syrian battlefield, they could augment militant groups internationally.”