The mistake came in a segment produced by their US bureau about potential new missile bases in “Japan, South Korea and Australia”. But in a large, erroneous graphic only Australia was correctly labelled. 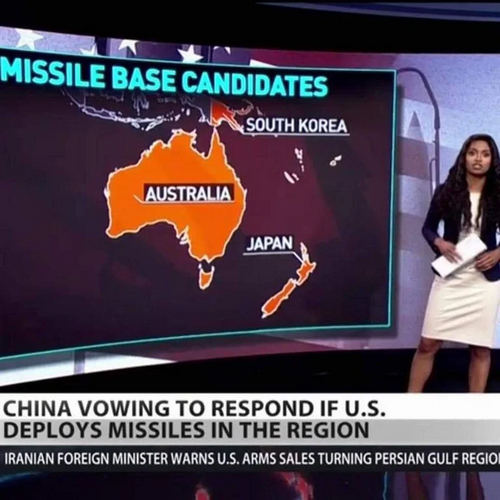 so looks like my flight to Japan for the RWC is going to be quicker than I expected pic.twitter.com/5hj0Qud4jV

It is the latest in a long line of incidents involving New Zealand and geographic mistakes. The country is left off maps so frequently it prompted the prime minister, Jacinda Ardern, to star in a special light-hearted campaign in protest, back in 2018.

A spokesperson for RT confirmed to New Zealand news site Newshub that the mistake was genuine.

“Our American early morning news team suffered a little geography mishap,” a spokesperson said. “We… have corrected ours as soon as it was spotted, and have given our team a new map of the southern hemisphere to ensure it doesn’t happen again.”

The segment, aired on 15 August, has since been corrected in the online version and remains available on YouTube on RT America’s channel. The caption makes clear that “this video includes a corrected map”.

In the segment, titled “Manoeuvring missiles”, correspondent Ashlee Banks explained how the US was looking at potential missile bases in Asia.

“Another fight between the US and China is heating up, this time it’s over missiles,” she said. “The US has officially withdrawn from the intermediate range nuclear forces treaty and now plans to place weapons across the Asia Pacific.

“The US is looking to place missiles in Japan, South Korea and Australia,” she said, even as the graphic showed something else.

New Zealand, a country of 4.7 million people, is so often forgotten on maps that Tourism New Zealand launched an entire campaign based on the phenomenon.

With Ardern and comedian Rhys Darby, it described it as “the next great conspiracy: New Zealand is disappearing off world maps”.

A Reddit thread dedicated to recording incidents where New Zealand is left off global maps has more than 74,000 subscribers – among them the infamous map of the world made entirely out of chicken nuggets, but without New Zealand.

Australian blue blood accused of being an anti-Trump ‘spy’