British Prime Minister Boris Johnson and European Council head Donald Tusk have traded barbs ahead of the G7 Summit in France over who would bear the blame should the United Kingdom leave the European Union without a divorce deal in place. 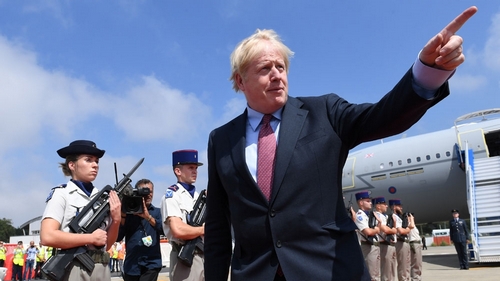 In separate comments to the press on Saturday, Johnson and Tusk said the other would be called “Mr No Deal” in the event the UK and EU find themselves at an impasse.

They spoke shortly before G7 leaders gathered in the coastal resort town of Biarritz for the three-day summit.

Johnson has staked his leadership on a “do or die” withdrawal from the EU by the current deadline of October 31.

Tusk told reporters in Biarritz that he would be willing to hear ideas from Johnson on how to avoid a no-deal Brexit when the two men meet on Sunday for bilateral talks.

But, he said he would not work with Britain on an exit from the EU that did not include a withdrawal agreement.

“I still hope that PM Johnson will not like to go down in history as Mr No Deal,” said Tusk.

Johnson later retorted that it would be Tusk himself who would carry the mantle if Britain could not secure a new withdrawal agreement.

“I would say to our friends in the EU if they don’t want a no deal Brexit then we’ve got to get rid of the backstop from the treat,” Johnson said, referring to the so-called “Irish backstop“, a main sticking point in the negotiations.

“If Donald Tusk doesn’t want to go down as Mr No Deal then I hope that point will be borne in mind by him too,” he added.

A deal without a backstop?

The “Irish backstop” is designed to prevent the return of customs checks on the border between the Republic of Ireland and Northern Ireland, which is part of the UK.

Johnson has accused the plan of being “anti-democratic” because it would require London to keep its regulations aligned with those of the EU during a transitional period when the country is no longer a member of the bloc.

He has promised to find alternative solutions for the Ireland issue without the need for the backstop, though EU leaders remain to be convinced.

“There are a large range of alternative arrangements – these we will be discussing in the coming weeks,” Johnson told reporters.

During a European tour before the summit talks, Johnson met with German Chancellor Angela Merkel and French President Emmanuel Macron, expressing cautious optimism that a deal could be agreed to before Britain leaves the EU.

But his frosty exchange with Tusk seems to indicate there is still a mountain to climb if they hope to reconcile their positions in just over two months.

There are no planned bilateral meetings between Johnson and Merkel or Macron during the summit.

The fallout of leaving the EU without a withdrawal agreement could include disruptions to the supply of medicines, a decrease in the availability of fresh food  and potential fresh water shortages due to difficulties in importing water treatment chemicals, among many other issues that come from unraveling decades of free trade in goods and services.

In his statements on Saturday, Tusk insisted the EU was still “willing to listen to ideas that are operational, realistic and acceptable to all member states, including Ireland.”