In October 2009, a small town in central Bulgaria named Lovech welcomed a Chinese dignitary that few in the country, let alone in the town, had heard of. 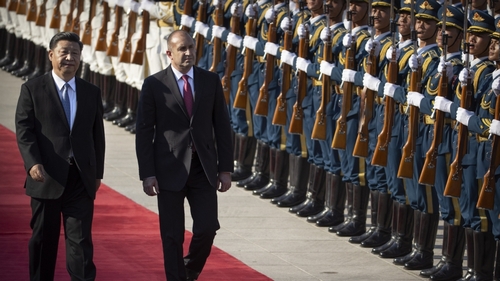 China’s President Xi Jinping and Bulgaria’s President Rumen Radev review an honour guard during a welcome ceremony at the Great Hall of the People in Beijing, July 3, 2019 [Mark Schiefelbein/AP]

Xi Jinping, then China’s vice president, was on a European tour, gathering experience in foreign affairs as he was moving on to the pinnacle of power. In Lovech, he witnessed the signing of a joint venture deal between Bulgarian diversified holding company Litex Commerce and the Great Wall Motors, one of China’s leading automotive manufacturers. Then the up-and-coming politician took off to Bucharest.

The manufacturing plant in Lovech went bust in 2017, but the hunger for Chinese investment remained. Ten years down the road, it is Balkan leaders who are heading to Beijing, eager to meet Xi. While the United States is embroiled in a trade war against China and most Western governments fret about tech companies like Huawei, Southeast Europeans are still eager to get deals on roads, bridges, power plants and greenfield manufacturing projects from Beijing.

In April 2012, just a year before Xi became president, China launched the 16+1 initiative, a platform bringing together China and 11 EU member countries in Eastern Europe as well as five candidate states in the Western Balkans.

There has been no shortage of interest in this forum on the Balkans. In 2018, Sofia hosted the forum; this year, it was held in Croatia’s historic town of Dubrovnik. Belgrade and Bucharest have had their turns too in past years. Lately, Greece, too, has made an effort to join this grouping of post-communist states, which has been rebranded 17+1.

This year, a number of top officials from the Balkans made the lengthy trip to Beijing. In April, Serbian President Aleksandar Vucic met Xi in the Chinese capital; a day later Greek Prime Minister Alexis Tsipras followed suit. In May, Greek President Prokopis Pavlopoulos also showed up in Beijing. In July, Bulgarian President Rumen Radev paid an official visit, too.

The region’s interest in Chinese investments, however, has not gone unnoticed. Officials and China-watchers in the EU, wary of Beijing’s policy to maximise its clout through divide-and-conquer tactics, have been voicing concern.

“Maybe we have overestimated Russia and underestimated China” when it comes to their reach in the Balkans, Enlargement Commissioner Johannes Hahn told Financial Times in March. Hahn is concerned that the Western Balkans risk being trapped in debt, a view shared by the Munich Security Forum.

He might have a point. While Russia is good at playing the Slavic brotherhood card and loves to talk tough against the West, it lacks the economic heft to present a credible challenge. China, with a GDP of more than $12 trillion, is in a different league.

At three percent of the overall inflow, Chinese investment into the region – which is largely based on loans benefitting Chinese infrastructure companies – pales in comparison to that of the EU, which accounts for around two-thirds. Yet ambitious ventures such as the Belt and Road Initiative unveiled by Beijing in 2013 would no doubt lead to an increase.

Some of the money has already poured in. Thanks to the acquisition of the steel plant in Smederevo by Chinese company HBIS, China’s share in the overall stock of foreign direct investment in Serbia jumped from 6 to more than 20 percent.

The Exim Bank of China is also financing the modernisation of two sections of the railway connecting Belgrade and Budapest. The contracts implemented by the China Communications Construction Company (CCCC) are worth $1.5bn.

The Serbian government has been in talks to purchase Chinese-made drones as part of a deal that will also involve technology transfer, allowing the country’s defence industry to eventually produce its own UAVs in the long term. Belgrade has been procuring face-recognition software, too. Following a recent visit by his counterpart from China, Interior Minister Nebojsa Stefanovic touted joint police patrols and even military exercises.

Meanwhile, trade has tripled between 2005 and 2016, reaching $1.6bn in volume. Serbia is becoming “China’s open door to the Balkans”, according to some observers.

How far Chinese-Serbian cooperation can go remains to be seen. But what is certain is that Vucic does not mind sitting on more than just two chairs, as a senior US diplomat once characterised Serbia’s dance between the West and Russia.

Apart from Serbia, China is also making large investments in other parts of the Balkans too, namely in infrastructure and energy.

Since 2009, Chinese company COSCO has been in charge of the main Greek port of Pireus, first as an operator and then as a majority owner. Until 2017, COSCO was also bidding for the Thessaloniki port.

In Croatia, member of the EU since 2013, a Chinese consortium is building a 2.4km-long bridge connecting the Peljesac Peninsula and the village of Komarna, both on the Adriatic coast.

The project has attracted a fair share of publicity: first, because it cuts across the gulf of Neum shared with Bosnia and Herzegovina, and, therefore, impedes its access to the high seas; second, because the bridge is largely funded by the EU. A subsidiary of CCCC, a Chinese state-owned enterprise, is benefitting from a $396m grant from Brussels.

China has been involved in road construction projects in Montenegro and North Macedonia, as well.

In Tuzla, Bosnia and Herzegovina, China started building a thermal plant in, backed by a $777m loan from Exim Bank. This was after in March, political factions in the Federation, one of the country’s two entities, made a rare show of unity in parliament giving green light to the project.

That happened only after the three Chinese companies involved in the venture threatened to pull out. On this occasion, Beijing’s money went further in disciplining Bosnian politicians than Western overseers of stability in the Balkan state.

Is China able and willing to use its ever-growing investments in the Balkans to expand its political footprint? Perhaps yes, but in the short to medium term, China is not likely to stake a claim on regional security. It will remain a geo-economic power, as far as the Balkans is concerned.

As noted by Anastas Vangeli, an expert of Chinese foreign policy from North Macedonia, local countries are interested in China and the EU working in sync rather than competing.

Yet it is a golden rule in politics that perception is reality. Tensions between the West and Beijing would no doubt be felt in Europe’s periphery.