Bitcoin (BTC) transaction fees have dipped below than those of Bitcoin Cash (BCH), marking a blow to one of the hard fork’s central remits.

Battle Of The Satoshis

Data from monitoring resources Wednesday confirms the turnaround as BTC continues to see a drop in transaction fees not seen for six months. 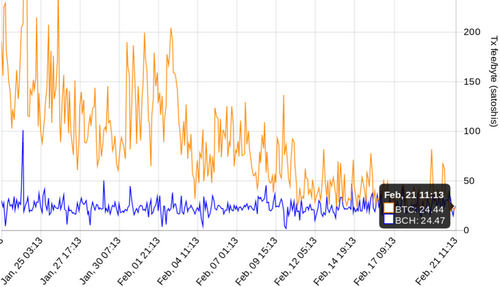 Bitcoin Cash proponents have long touted low transaction fees as one of the two major ‘advantages’ the hard fork has over the original Bitcoin network. Together with faster transaction times and greater network capacity, Bitcoin Cash was designed to provide currency-focused services in Bitcoin better than Bitcoin itself could manage.

During an extended publicity push for the altcoin, well-known supporter Roger Ver explained these benefits to multiple mainstream media publications, describing Bitcoin variously as “Bitcoin SegWit” and even a “cripple coin.”

“If you have two versions of Bitcoin, one is slow, expensive and unreliable (Bitcoin SegWit) and you have another version of Bitcoin which is super fast, reliable and cheap, it’s not a tough decision,” he told the Rubin Report in December.

This month saw a further challenge to his words, with SegWit receiving full support in the latest Bitcoin Core client release – giving the Bitcoin network faster transactions and increased capacity. Major exchanges Coinbase and Bitfinex are also racing to support the technology.

At the same time, the Lightning Network has made considerable gains in adoption since its own release less than two months ago, providing an ‘off-chain’ scaling solution which could reduce the average transaction fee and wait time to virtually zero.

President Of The Atlanta Federal Reserve Declares ‘Crypto Is Not Currency’