The UK won’t leave the European Union until March 2019. For economists, forecasting what will happen between now and then, and especially beyond, is practically impossible.

Most official economic forecasts for the UK economy assume a smooth Brexit process. For the Bank of England, this means assuming that households and businesses plan for a seamless transition to a new trading relationship with the EU after Britain leaves the bloc. The European Commission makes the “purely technical assumption” that the UK maintains the status quo in its trade relations with EU members. The UK’s Office for Budget Responsibility (OBR), the independent forecasting group for government plans, says it has “no meaningful basis” to make forecasts about the course of Brexit, so it just assumes somewhat slower trade and immigration in the future.

Even under these assumptions that Brexit will be relatively smooth and the UK will continue to trade with its largest trading partner under favorable terms, the outlook for the UK economy is getting bleaker and bleaker.

This week, the OBR drastically cut its projections for economic growth. It’s now the first time in modern history that the UK’s GDP growth is estimated to fall under 2% for every year of the forecast period, according to Sky News. The Bank of England, meanwhile, forecasts growth of about 1.7% a year for the next three years (pdf), much lower than the 2.5% average since World War II. The European Commission predicts UK GDP growth of just 1.1% in 2019, the slowest of almost any EU country. 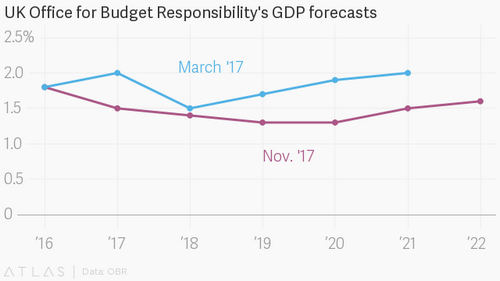 And these are the relatively optimistic forecasts. Given the apparent deadlock between London and Brussels over what the UK owes the EU it leaves, what rights citizens will retain after the split, and what will happen to the border in Ireland, time is running short to work out the logistics of Britain’s exit, much less negotiate a comprehensive trade agreement to apply after Brexit. The OECD, which doesn’t assume a smooth transition and immediate trade deal with the EU, forecasts UK economic growth to be just 1% next year (pdf).

Not all of this gloom is a direct result of Brexit. For the OBR, the cuts to their growth forecasts are mostly because they’ve reconsidered future productivity growth. In the 35 years before the financial crisis, output per hour grew more than 2% a year, propelling the UK economy forward. For the past 10 years, productivity growth has averaged just 0.2%. The OBR finally abandoned their hope of productivity returning to its pre-crisis trend this week. Brexit is almost certainly bound to make the problem worse, as the uncertainty over the process dampens business investment.

This hasn’t stopped the UK government putting a brave face on it all. Consider the contrast between what chancellor Philip Hammond said on Nov. 22 as he presented the government’s latest budget and the OBR’s forecasts the budget is based on, published the same day (pdf).

OBR: “The pattern of strengthening growth across the other major advanced economies this year contrasts with the slower pace of growth in the UK.”

Hammond: “A future that will be full of change; full of new challenges and above all full of new opportunities.”

OBR: “The persistence of weak productivity growth does not bode well for the UK’s growth potential in the years ahead.”

Government ministers’ steadfast optimism is pretty remarkable. As the Resolution Foundation, a think tank, put it (pdf), the OBR offered up “a truly catastrophic set of economic forecasts” this week. The foundation now believes that average pay in the UK won’t return to its pre-crisis peak until 2025, making for almost two decades of stagnant pay growth. Put another way, the UK is facing the longest fall in living standards since records began more than 60 years ago. The Institute for Fiscal Studies, a research group, notes the UK economy is now forecast to be £65 billion smaller in 2021 than was forecast in the last government budget before the Brexit referendum.

Of course, economic forecasts are wrong almost as often as they are right. The UK economy could see an unexpected post-Brexit boost to business investment, productivity, and wage growth. But it’s as likely, if not more so, that things will turn out even worse.

Read this next: The UK has officially resigned itself to dismal productivity growth