The Holland Festival is the oldest and largest performing arts festival in the Netherlands, which takes place every June in Amsterdam. It gathers hundreds of artists, actors, dancers, musicians, and journalists from over 20 countries, including Australia, Austria, Belgium, Chile, Colombia, the Democratic Republic of the Congo, Estonia, France, Germany, Iran, Latvia, Lithuania, the Netherlands, Poland, Portugal, Russia, South Africa, Spain, the United Kingdom, the United States and Uzbekistan. 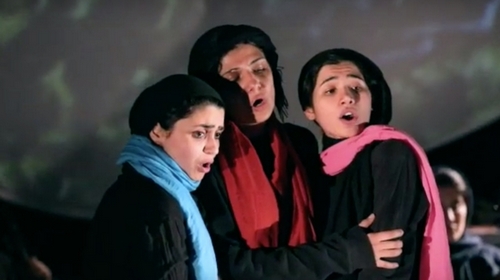 Still from rehearsal footage of Turan Dokht, which premiered in Tehran on February 24, 2019 [Screenshot/Miranda Lakerveld/YouTube]

In early June, I was invited to Amsterdam by the Holland Festival to deliver a keynote on the occasion of an extraordinary event in the course of its 2019 programme.

This year, its programme included the European premiere of Turan Dokht, an exceptionally daring and imaginative opera, which the festival had described as “an intercultural rewriting of Puccini’s famous opera Turandot” (1924). My humble role in this grand event was to give a talk introducing the opera and exploring “the influence Persian literature, music and other art forms have had on Western and Asian art”.

In my recent book, Persophilia: Persian Culture on the Global Scene (Harvard, 2015), I had traced the rise of European interest in Persian visual, literary, poetic, and performing arts in the 18th and the 19th centuries, using – among other works – the libretto of Italian composer Giacomo Puccini’s Turandot, which borrowed its story from the romantic epic Haft Peykar (Seven Beauties) by the 12th-century Persian poet Nizami Ganjavi.

This widespread European attention to Persian sources was not accidental or haphazard. Puccini and other European composers, artists, poets and philosophers were part of the larger context of centuries of cultural exchanges between the Persian and the European art and literary scenes.

This new opera Turan Dokht (daughter of Turan in Persian), composed by the gifted Iranian composer Aftab Darvishi and directed by the Dutch dramatist Miranda Lakerveld, has crafted an entirely new experience located somewhere in between the Italian and the Persian masterpieces to which it is alluding.

The Persian roots of a European masterpiece

Turan Dokht is indeed a beautiful tribute to both Puccini’s Turandot and Nizami’s Haft Peykar, which share a story about a mystifying princess.

In the Persian epic poem, written in the 12th century, the main character, King Bahram Gur, is entertained each day of the week with a story told by one of the seven princesses from seven climes, corresponding to seven colours and seven planets.

In the second half of the 18th century, a translated version of the poem reached the Italian playwright and leading advocate of Commedia dell’arte Carlo Gozzi (1720-1806) and eventually ended up in the hands of Friedrich Schiller and other European playwrights and composers. Puccini’s opera uses one of the seven stories and casts its main character, Turandot, as a vengeful princess who is intent not to marry and have her suitors meet dreadful ends.

In Darvishi and Lakerveld’s work, the story of the princess is reimagined yet again and brought back closer to its Persian roots. The young Iranian composer combines classical Persian and European musical traditions for a joyously surprising rendezvous – cleverly teasing out Puccini’s signature aria Nessun Dorma from a gracious fusion of Persian and European instruments – while bringing Nizami’s masterpiece alive to her Dutch colleague’s patient, learned, and cultivated directorial homage to Persian miniature tradition.

Indeed, at the opening night on June 5, the packed Grote Zaal in Muziekgebouw concert hall in Amsterdam was the site of the cross-currents of the best the European and the Persian cultures can give and grace and enrich each other.

What was impressive and noteworthy about this particular opera was the fact that a major European art festival had allocated its crucial resources to an opera that not just staged a non-European artwork but that in and of itself had challenged one of the foundations of European high culture.

But at the same time, the lukewarm or even negative reviews that were coming out about the opera were indications of the jealously-guarded pantheon of European art being protected against foreign intrusions.

To be sure this is not peculiar to European art critics. I can well imagine if a European artist had gone to Iran or India or Egypt and staged a play in which the Shahnameh or Mahabharata or the Arabian Nights were implicated in any European origins there would be equally suspicious responses.

The fact that overrides such false binaries is the tertiary space that a work of art like Darvishi and Lakerveld’s opera generates. Their Turan Dokht does no harm either to Puccini or to Nizami but sends them both a love letter in the form of an artwork that remains true to the factual evidence of people moving from one culture to another, and their arts too moving and reconfiguring themselves in their new habitat.

Being in a European capital on the occasion of Turan Dokht’s was to rediscover what it is we love about the emerging Europe that its racist xenophobes so vehemently hate.

It is the Europe whose most gifted artists stage operas celebrating the distant non-European artists, thinkers, and poets informing their most revered composers; the Europe whose university campuses are studded with Asian, African, and Latin American scholars and critical thinkers; the Europe whose recent immigrant communities bring the gift of their continental cultures to their new home; the Europe, testing the palates of Arabic, Persian, Indian, or Turkish cuisines with local and regional wines; the Europe that is recasting itself with the hard work of its diverse communities.

There is a happy and healthy Europe under the skin rash of the fear and loathing racist politicians monger through their xenophobic politics. It is imperative we do not ignore this Europe. The Netherlands which hosted this festival is the same country where viciously racist politicians like Geert Wilders and rabid Islamophobes like Ayaan Hirsi Ali have plagued the airwaves for years.

Like the rest of Europe, it has also seen a surge in nationalist, populist and xenophobic political sentiments, which have used recent refugee crisis in the Middle East to sow fear among citizens in their pursuit of political dividends.

There is a vast difference and an irreconcilable contradiction between the monocultural map European and North American racists wish to superimpose on continental Europe and the truth of its internal and incoming cultures. Works of art like Darvish and Lakerveld’s Turan Dokht does not just bring a faraway Persian poem home to its new European habitat. It also awakens Europe itself to its own composite, multicultural, and pluralistic reality.

A poem like Nezami’s Haft Peykar, or even the Khamseh/Quintet from which it is a part, and by extension other masterpieces of Indian, Persian, Arab or Chinese literary arts, were not alien to European readers even before Puccini composed his magnificent Turandot. What operas like Turan Dokht do is bring that forgotten history home to a Europe that under the falsifying spell of racist xenophobe is forgetting its own history.

By bringing a new gift through the opened borders of Europe, Turan Dokht, in short, de-fetishises Turandot. It makes it even more meaningful and beautiful by placing the joyous homage of a young Iranian composer and Dutch dramatist next to the justly celebrated legacy of an Italian master.

How to Choose a Weed Vape Pen