Athens, Greece – Greece’s conservative New Democracy party is poised to take power in a general election on Sunday, after nearly five years of left wing rule. The latest polls show the centre-right opposition party of Kyriakos Mitsotakis leading the ruling Syriza by 9-11 percentage points and winning as many as 165 legislators in the 300-member parliament.

At a final election rally on Thursday, a jubilant Mitsotakis, the son of a former prime minister, promised hundreds of supporters in the Greek capital, Athens, prosperity after a decade-long financial crisis.

“The warmth of your reception is a sign that tomorrow Greece is lifting its head high, but it’s also pulling up its sleeves to build a new future,” the 51-year-old former banker said beneath the Acropolis.

The southern European country suffered the worst of the Eurozone’s recessions in the wake of the 2008 global financial crisis. Successive governments in Greece cut public spending to balance the budget, triggering a depression that shrank the country’s economy by a quarter.

More than a million jobs were lost, throwing many Greeks into poverty.

Despite promising to end austerity, the Syriza government disappointed supporters by ignoring the results of a referendum on Europe’s austerity packages, signing onto a third bailout deal and implementing harsh fiscal measures imposed by the European Union and the International Monetary Fund. 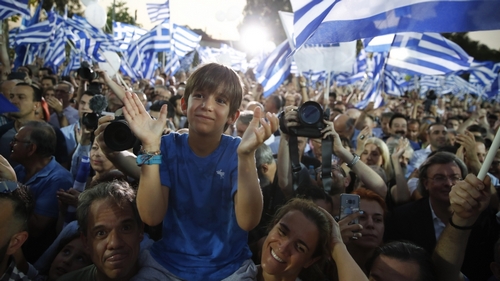 Greece’s exited the bailout programme in August last year and its economy is beginning to recover with growth forecast at two percent for the next three years. But that has failed to placate voters’ anger or stem the flight of up to 100,000 young people from the country each year.

Mitsotakis has campaigned on promises of slashing bailout taxes, reforming Greece’s bureaucracy, and facilitating bank loans to businesses. These measures could double growth to four percent and create 700,000 jobs over his term, he said. In return he has asked businesses to repatriate and invest approximately 10 billion euros held in overseas bank accounts.

“[Lowering tax] will certainly help us a great deal,” said Alexandros Kalogritsas, who inherited his father’s car repair shop. The crisis cost him 40 percent of his business, he said.

“When business tax is 29 percent, reducing it by nine percent is a huge relief for us. That can turn into better profits for us and better prices for customers,” he said.

The tax cuts proposed by Mitsotakis include slashing social security contributions by a quarter and halving farmers’ income tax. The construction industry, which collapsed during 2010 – 2014, would also be relieved of sales taxes for three years.

“People are becoming more open to the idea of lower taxes even if it means less social protection, and especially if lower taxes help generate more growth and more jobs,” said Yiannis Palaiologos, author of The 13th Labour of Hercules: Inside the Greek Crisis.

New Democracy has also capitalised on public discontent over a controversial deal last year to rename the Yugoslav Republic of Macedonia to North Macedonia.

The 2018 agreement lifted Greece’s veto to North Macedonia becoming a NATO member and won plaudits from the EU and the US.

Many Greeks were resigned to recognising the former Yugoslav republic under a name that included the term Macedonia, along with a qualifier to distinguish it from the Greek province of the same name. But Greeks were angered by the agreement’s recognition of a Macedonian nationality and language. 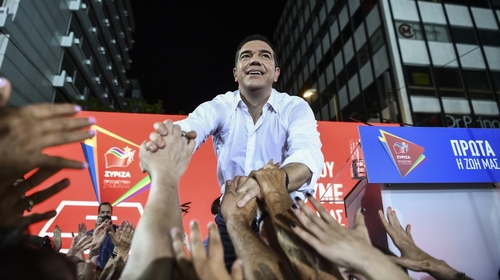 Greek Prime Minister Alexis Tsipras is cheered by his party’s supporters during a pre-election rally in Athens on July 5, 2019. [Aris Messinis/ AFP]

Syriza did not put the deal to a referendum, approving it with a parliamentary vote that prompted the leadership of the nationalist Independent Greeks party to leave the ruling coalition.

“The recognition of a “Macedonian” ethnicity and “Macedonian” language constitute a mistake of the greatest proportions and a profound national retreat in relation to what previous governments had negotiated,” Mitsotakis told European Parliament in March. His party has suggested it would block an EU invitation to the Balkan nation to open membership talks.

Syriza’s popularity was also dented over the government’s response to a wildfire last year that killed more than 100 people in the seaside resort of Mati, east of Athens.

Half a million jobs

On Friday, Tsipras made a last-ditch appeal to voters.

“We came to unite all Greeks, we combined our strength. Without this unity we would not have emerged from austerity,” Tsipras told a crowd of several thousand people on Athens’ main Syntagma Square.

“And now the people who cast Greece into the darkness want revenge not from a political party, but from an entire nation,” he said, referring to New Democracy and the socialist Pasok that governed the country before Syriza assumed power.

Tsipras is campaigning on his record of overseeing Greece’s emergence from an eight-year austerity and reform programme. He has also pledged to slash taxes and create jobs.

In the run-up to the European elections, it began dismantling some of the most unpopular austerity policies. It re-introduced collective wage bargaining, raised the minimum wage and halved sales taxes on packaged foods and restaurants.

In May, it also offered a one-time bonus to 2.5million pensioners. 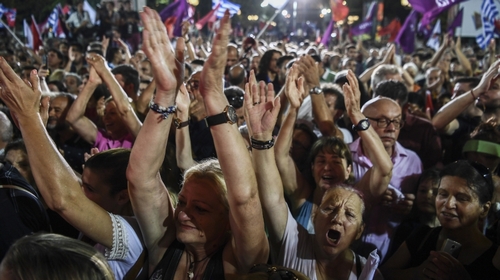 Supporters of Syriza party at a pre-election rally in Athens on July 5, 2019 [Aris Messinis/ AFP]

But retirees like Andreas Yiannoukakis were left unimpressed. After working for 49 years, he supports a wife and unemployed son on $1,200 a month.

“This man is condemned,” he says of his 35 year-old son, who speaks three languages and has a degree in network computing. “I look at him and weep. I ask myself, ‘what have I created? Why did I have a child? Where is his future?’… He can’t get married. How is he going to rent a house?”

“It becomes so obvious that the incentive behind [bribing voters] is to gather votes, it’s rather insulting for many people and it never works,” he said.

“It seems that Syriza had sustained more damage than people knew about. It was partly because there was no interim election. [Syriza] had a clear path for three and a half years.”