Authorities in the Czech capital’s Bubeneč district put the imposing monument honouring Marshal Ivan Konev under cover after saying they were no longer prepared to keep cleaning it following repeated paint and graffiti attacks. 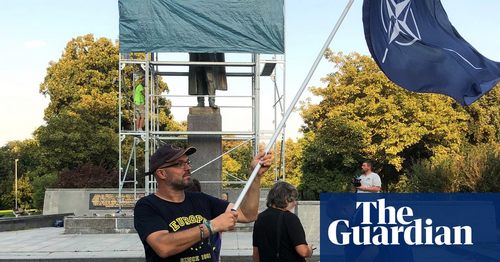 A statue of a second world war Red Army general repeatedly targeted by vandals has been covered with a tarpaulin amid an escalating row between Czech officials and Russia’s embassy in Prague over its status.

The move – announced by the mayor of Prague 6 municipality, Ondřej Kolář – has further inflamed passions over the 40-year-old statue, long controversial in the Czech Republic because of Konev’s role as an enforcer of Soviet military power in postwar eastern Europe.

Kolář, a member of the pro-EU Top 09 party, said he had been forced to leave Prague after being given police protection, which was put in place on Friday after he received threats by email, social media and text message.

“People were calling my office, threatening even my assistants,” he said. “A few have also come personally to the town hall, asking the receptionists where I could be found so they can beat me up.”

The Russian embassy denounced his decision on its Facebook page as a “repeated disgrace” and noted that it was “taken on the eve of the 80th anniversary of the start of the worst military conflict in human history”. Konev was twice officially recognised as a hero of the Soviet Union by Stalin.

The tarpaulin, supported by a large scaffold frame, was torn off three times after being fitted on Friday. Two men were arrested and charged with damaging the cover after they were observed leaving the scene in the early hours of Saturday morning. Czech media attributed the damage to “activists”, widely believed to be pro-Russian.

Temporary fencing has been installed to foil further attempts to rip off the cover. A council spokesman said it would remain at least until 12 September, when the statue’s future will be discussed at a council meeting.

At the weekend, a worker re-covered the monument, located on Interbrigády Square – a neighbourhood that also hosts the Czech defence ministry and army headquarters – while opposing groups of activists gathered under the watch of two police officers.

Petr Lázňovský, 48, a pro-democracy campaigner waving a large Nato flag, called the controversy an example of the “hybrid warfare” he said Russia was waging on the Czech Republic.

“The crucial point for me is that the Russian embassy, in its Facebook post, claimed it had received letters from Czech citizens wondering which side in the second world war would the Prague 6 mayor have preferred to have won,” he said. “They are implying that Mayor Kolář is pro-Nazi. This is unacceptable for me.”

The statue, which is owned by the Czech state, was commissioned during the cold war by the communist regime that then ruled the former Czechoslovakia, in recognition of Konev’s supposed feat in liberating Prague from Nazi occupation in 1945 – an assertion dismissed by historians, who argue the city was already free when his forces arrived.

Kolář insisted he did not dispute that Soviet forces “had liberated a great part of Czechoslovakia” and added: “We are grateful to those men in arms who sacrificed their lives for our freedom.”

Russia reacted angrily last year after the council amended the original plaque and added others citing Konev’s lesser-known role in more notorious episodes – namely the suppression of the 1956 Hungarian uprising, the building of the Berlin Wall, and the 1968 Warsaw Pact invasion of Czechoslovakia that crushed the Prague Spring.

Last month, the statue was defaced with red paint as Czechs marked the invasion’s 51st anniversary, prompting Kolář to say the council would not repair the damage.

The mayor has previously offered to give the statue to the embassy so it can be displayed on its grounds.