I’m afraid that’s all from me for today. I need to go to a meeting.

Tory Brexiters have welcomed Donald Tusk’s comment about a “Canada plus plus plus” deal being on the table.

This is from Jacob Rees-Mogg.

This is a good solution for everyone and the ERG’s proposals for the Irish border mean it could work for the UK as a whole. https://t.co/Nb2ftyixd8

And Steve Baker is saying the same, the Telegraph’s Christopher Hope reports.

Former Brexit minister Steve Baker tells @telegraph: “I am deeply encouraged that President Tusk wants a deal and is clear about the framework of that deal.

“This does once again reinforce that Eurosceptic Conservatives are campaigning for what the EU wants to give us…” https://t.co/ocE3nTpJFs

Here is the Tom Watson letter in full. 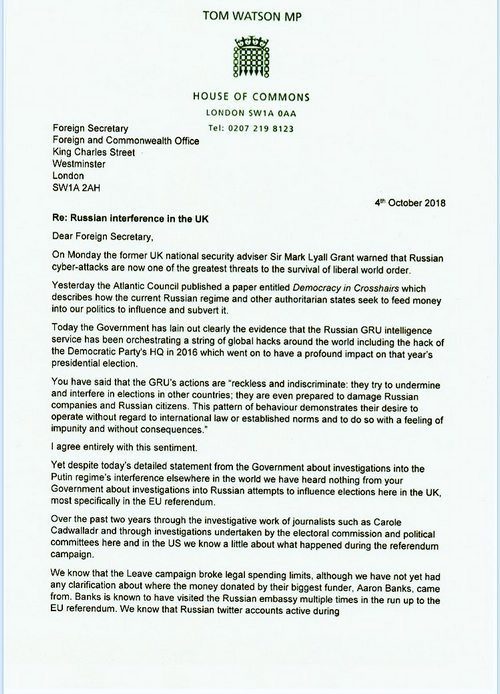 Tom Watson, Labour’s deputy leader, has written to the foreign secretary Jeremy Hunt this lunchtime in the aftermath of the GRU hacking allegations asking him about possible Russian interference in the Brexit referendum in 2016.

In his letter he asks Hunt:

Can you therefore confirm whether any investigation is being undertaken by our intelligence services and other authorities into Russian interference in the UK? If it is not will you instruct the security services and other relevant bodies to begin one?

The MP has previously called for a “a Mueller-style full public inquiry into Russian interference in the referendum” and he repeated that demand in the letter – asking Hunt “does the government oppose such an inquiry or will you grant one?”

Watson’s remarks in part refer to Ukip donor Arron Banks. The Electoral Commission is currently investigating the source of the multi-million pound donations and loans Banks gave the smaller Leave.EU campaign. Banks has denied any improper Russian associations although he did meet the Russian ambassador for a “six hour boozy lunch” in 2015 and was subsequently offered the chance of participating in a gold deal, which Banks says he declined to do.

Here are the main points from what Donald Tusk said after his meeting with Leo Varadkar, the Irish prime minister.

Unacceptable remarks that raise the temperature will achieve nothing except wasting more time. What needs to be done is maximum progress by the October European council.

I was [a] party leader myself for 15 years and I know what the rules of party politics are. But now the Tory party conference is over we should get down to business.

The EU offer has been not just a Canada deal, but a Canada plus plus plus deal – much further reaching [than the EU-Canada deal] on trade, on internal security and on foreign policy cooperation. This is a true measure of respect and this offer remains in place. The EU is serious about getting the best possible deal, even though we have not changed our mind that the consequences of Brexit will be negative, for both sides.

Telling the truth, even if difficult and unpleasant, is the best way of showing respect for partners. That’s how it was in Salzburg, and that’s also how it will work in the coming days…

Emotional arguments that stress the issue of dignity sound attractive, but they do not facilitate agreement. Let us remember that every actor in this process has their dignity. And confrontation in this field will not lead to anything good.

This is what Donald Tusk said about Jeremy Hunt’s speech to the Conservative conference on Sunday implicitly comparing the EU to the Soviet Union. Tusk, the president of the European council, said:

In respecting our partners, we expect the same in return. Comparing the European Union to the Soviet Union is as unwise as it is insulting.

The Soviet Union was about prisons and gulags, borders and walls, violence against citizens and neighbours. The European Union is about freedom and human rights, prosperity and peace, life without fear; it is about democracy and pluralism, a continent without internal borders and walls.

As the president of the European Council, and someone who spent half of my life in the Societ bloc, I know what I am talking about.

The Soviet spirit is still alive. You will know best where to find this spirit – not in Brussels. And I am sure you will also remember who was the first to declare full solidarity with the UK at that critical moment.

Q: Should Hunt resign over his comments?

That’s not my problem, says Tusk.

And that’s it. This was not intended to be a press conference, and the statements are over.

He says he also wants the EU and the UK to get down to business.

He wants a deal by November if possible, he says.

He says he will put cyber-security on the agenda for the next EU summit in the light of today’s revelations.

Unacceptable comments do not help, he says.

He says he was a party leader, and knows the rules of party politics.

But now the Conservative conference is over, it is “time to get down to business”.

Donald Tusk, the president of the European council, and Leo Varadkar, the Irish prime minister, are speaking to journalists after their meeting in Brussels now.

Tusk says the EU wants the best relationship with the UK after Brexit.

But the EU will not give up its values and interests, he says.

He says from the start the EU has offered, not just a Canada deal, but “a Canada plus plus plus” deal”. It goes much further than the Canada trade deal on issues like security.

This offer is still on the table, he says.

And he criticises what Jeremy Hunt, the foreign secretary, said in his speech to the Tory conference.

Comparing the European Union to the Soviet Union is unwise at it is insulting.

Jens Stoltenberg, the Nato secretary general, has posted this tweet about today’s revelations about the GRU.

#NATO stands in solidarity with the Dutch & UK governments in calling out #Russia on its cyber attacks against @OPCW & others. Russia must stop its reckless pattern of behaviour to undermine international law & institutions. NATO Allies work together to bolster our cyber defences pic.twitter.com/8dPHcRBdYy