If anyone needed further proof that fascism is still alive and well in Italy, the footage of Carola Rackete, the 31-year-old captain of the migrant-rescue ship Sea-Watch 3, getting arrested in Lampedusa for trying to save 42 asylum seekers, provides a graphic illustration. 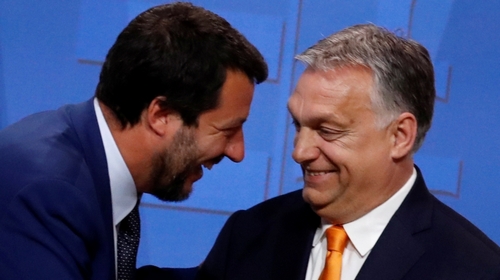 The late Italian fascist leader, Benito Mussolini, would have been proud of Italy’s Interior Minister Matteo Salvini for creating a country in which a young woman may face up to 10 years in prison for the unforgivable crime of saving human lives.

Beyond Europe, efforts to unify right-wing populists have spanned the globe. Former White House aide Steve Bannon, for example, dreams of creating a united cross-border front – from Brazil, through the United States and Europe, all the way to India and the Philippines – against refugees, cosmopolitanism, and anyone who supports these, including Pope Francis.

The world has not seen a resurgence in the radical right since fascism was defeated in the first half of the 20th century. But these new proponents of this global right-wing upsurge markedly differ from the fascist leaders of the past century; they seem to espouse a new type of fascist ideology.

Almost a century ago, classical fascism abandoned democratic liberties in order to pursue internal cleansing and external expansion without ethical or legal restraints. Although Mussolini, Hitler, and Franco pursued these internal and external goals in different ways, they all set themselves in opposition to a series of “others” that were not only ideological (liberals and communists) but also ethnic (Jews, Roma and other minorities).

Although US President Donald Trump, as well as the European parties, gathered under the Identity and Democracy umbrella, evince these traits in their rhetoric and, when they can, in their actions, their use of fascist techniques to stimulate their base and erode liberal democratic institutions are similar but not identical to those used by fascist dictators of the 1920s and 30s.

The contemporary sociopolitical context is quite different from that of the first half of the 20th century, so labelling these politicians as fascists in the classical sense of the world is not quite accurate.

The main difference between the classical and contemporary incarnations of fascism is that the version we observe today is operating within democratic systems rather than outside them. Proponents of 20th-century fascism wanted to change everything from above; Mussolini defined it as “revolution against revolution”. But fascism today aims to transform democratic systems from within.

Thus over the past decade, racist, homophobic, and xenophobic laws have resurfaced within democratic regimes through democratic procedures across the globe. These recrudescences are potentially more dangerous than surviving pockets of classical fascism’s anti-democratic ideology because mainstream conservative forces tend to ignore and even support them.

This is particularly evident in the US where the Republican Party continues to endorse Trump’s racism and hostility towards refugees and minorities as well as international and human rights agreements.

Another major difference between the two is that unlike classical fascism, its contemporary version does not concern itself with social welfare. Alongside its disastrous obsession with ethnic superiority, classical fascism took on the utopic duty of crafting an order which would better address the social and psychological needs of citizens who had been suffering the ravages of capitalism. But what has replaced this dimension in contemporary fascism?

Having emerged in an age of neoliberalism and competitive individualism, today’s far-right parties no longer feel the need to mobilise the masses by making grand promises of an alternative society or civilisation that would better their lives. Instead, they channel the anger and frustrations of isolated individuals who do not necessarily belong to the right or the left towards the “perpetual other” whose removal or ostracisation will supposedly solve all socioeconomic problems.

This is why Trump, for example, instead of supporting the Republican Party’s economic policies or its version of traditional national values, preaches a reactionary and xenophobic version of American individualism – as his recent attack against four congresswomen of colour has demonstrated.

This new nationalism is no longer defined in traditional ideological terms but rather as a resistance against the “threat” of globalisation and migration.

Jews, as historian Enzo Traverso has pointed out, were the particular enemy of classical fascism; Trump has altered and lengthened the list so that it now includes blacks, Latinos, Muslims, and non-white immigrants. This list has taken an additional patriarchal turn in a number of countries where feminists and queer activists are also portrayed as enemies of the nations’ traditional Christian values.

While there are indeed substantial differences between the fascism of the past and what we see today, the general historical trajectory will inevitably remain the same. That is, just as the fascism of the early 20th century grew out of control and ended in genocide, today, the ideology that Salvini, Bannon, etc subscribe has the potential to become even more violent if it remains unchecked.

While Rackete’s defiance is truly remarkable and should be commended, individual acts of courage will not stop the new fascist wave threatening to sweep through Europe and the rest of the world. We need collective action.