London – Anti-trafficking organisations said survivors should be given at least 12 months of specialist support to prevent them from falling back into a cycle of exploitation, as well as 30 months’ leave to remain in the country if they are not UK or EU nationals. 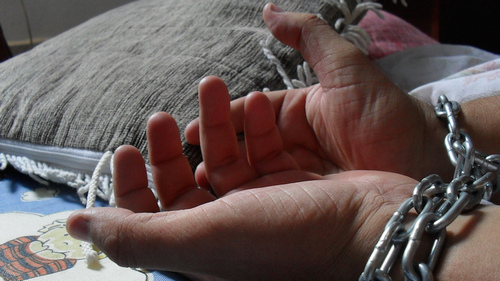 In the UK, being formally identified as victims of trafficking or slavery does not automatically grant them the right to remain [Getty Images]

On the World Day Against Trafficking in Persons, a report by the British Red Cross, London-based charity Hestia, and Sheffield-based Ashiana found that those most at risk are survivors with an uncertain immigration status. Being formally identified as victims of trafficking or modern slavery does not automatically grant them the right to remain in the United Kingdom.

The call comes a month after the Home Office, the UK government’s department responsible for migration and security, was forced to recognise that its policy of giving only 45 days of support to survivors once they are identified as victims was leaving them vulnerable to homelessness and retrafficking.

Survivors had been able to access specialist care including safe housing, financial support and counselling while going through the National Referral Mechanism (NRM), which can sometimes take years. However, this ends a month after they received a final decision.

Last month, a judicial review of the policy – which the Home Office introduced in October 2018 – granted two claimants interim relief, effectively suspending it. While the Home Office said it will not be reintroduced, further details have yet to be announced.

“We welcome the government’s recent announcement,” Katie Beaching, the head of Hestia’s modern slavery project, told Al Jazeera. “However for us it’s about removing any other barrier to receiving that care provision, and extend care in terms of its kind and what it covers.”

Among these barriers are current immigration rules, which the report recommends should be amended to create a specific form of leave to remain for survivors of modern slavery for a minimum of 30 months to give them time to recover and rebuild their lives.

Home Office data obtained for the report found that 752 people recognised as trafficking survivors between 2015 and 2017 had no right to remain in the UK – four in 10 survivors without UK or EU nationality. This leaves them at the mercy of Britain’s “hostile environment” policies, unable to access public services as well as work legally.

“It seems like the Home Office are looking for reasons to refuse,” she added. “Invariably we see asylum cases succeed on appeal to the tribunal but forcing victims of trafficking to go through a lengthy legal process undermines their recovery for even longer and costs the state a lot of money.”

A bill to increase support for victims of modern slavery – including housing, legal aid and healthcare – to 12 months is currently awaiting its second reading in the House of Commons.

Researchers at Nottingham University said earlier this month providing such support would prove more economically advantageous for the UK than not doing so, by preventing the need for emergency accommodation and making survivors more employable.

“The way the government has conflated the trafficking and asylum system, means that everything takes longer,” Marks said.

“Victims of trafficking who often have really specific high-level needs are actually suffering the most under the asylum system.”

Just how common are tornadoes in Europe?