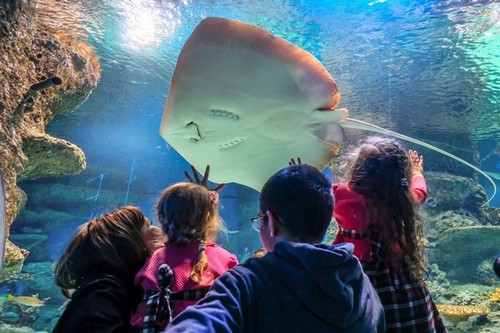 “Night of museums” in Novosibirsk correct to call in the evening — most of the sites were working just before midnight. In the Roerich Museum in addition to guided tours, for example, visitors are invited to draw themselves.

The Museum was a real crush. Due to the influx of free access to the Museum even had to close the doors from 20.00 to 20.30 — ten minutes on Red Avenue was crowded with a hundred people, and it was only +2 with a biting wind. As soon as the severe guard allowed those wishing to go, people poured into the narrow door, as if it is not a Museum, and the morning bus from the residential district to the center.

The exhibition “Your people,” photographer Anton Veselov visitors met with a very mixed reaction. It included 125 portraits of Novosibirsk politicians, businessmen, public figures, musicians and others, but the majority of visitors, many faces were completely unfamiliar, and captions also did not clarify.

This influx of visitors in museums of Novosibirsk, it seems, you can see only during school vacation.

Small and rustic, the Museum of the USSR better all greets visitors at the entry of mentally sings Valentina Legkostupova seems to be their only hit, “Berry-raspberry”, and girls under the age of 20 she is not shy to sing along. Parents are a little over 30 brought young children here and tell you how they are in the late ’80s and early’ 90s watched film strips — children born after the first iPhones, all these boxes with films seem ridiculous, but about the pioneers of the kids, perhaps for the first time I heard just today. Who did not the day before to be a pioneer, could take an oath in the Museum.

“We have searched. As you were in the United Arab Emirates?” — overacting, jokingly questioned the student employee of the Museum in the form of the NKVD. For some reason he starts waving in front of the laughing boy with an iron, like in the TV series about cops and gangsters start of zero. The realism of the interrogation, sure enough, but and artist, and schoolboy this game delivers a storm of positive emotions..

Not without the buffet, however, the prices are not Soviet kopecks and rubles — a hot dog for 35 rubles, and one pancake costs 10 rubles. While people are eating, and talk about serious things. For example, about how during the great Patriotic war economic match used three times if that was even a wizard that is used to match molded fresh sulfur.

Here is the Museum of birch bark kids like it much more than the stories dad and mom about a difficult childhood without the gadgets and cable.

“The bigger picture, the more likes” — the main rule in art Museum this evening.

The crematorium, but rather the Museum of world funeral culture, this night is the busiest — came by private car visitors have to defend the place to the Parking lot. Hundreds of the city’s residents happy and relaxed walking in front of the Park of the crematorium, but stimulated the brave souls rang the bell.

The most impressionable on trips gasp, every day in a special furnace are cremated 7-8 people, the embalming room has, where the door weighs a peace-loving sign, “Welcome!”, the girl flinches and is willing to share with a friend, she had the same blush which is used for makeup of the dead.

For 300-400 rubles on the faces here were drawing scary masks, most often in explanation of stage makeup rockers Kiss.

At the same time in the halls of the Museum of world funeral culture under a thousand, and near the most popular exhibits — dozens of people wanting to take a selfie.

Let the centre of Oceanography “Delfinija” and not a Museum, but for one night they have discount tickets, the entrance was only 250 rubles. Strange sea creatures do not leave anyone indifferent — had only the fish closer to the glass of the tank, adults and children just squealed with delight

SKAT — the real star of the aquarium. A special style when during the shooting he swims past me, as if hugging people from behind.

Nor sleet, nor cold did not prevent the Braves to arrange celebrations on the waterfront. The mayor Anatoly Elbow not only had a tour of the plant world promenade, but the ladies had to dance.

Near the first span of the railway bridge, the organizers arranged a show with fireworks “the time Machine”, dedicated to one of the founders of the city engineer Gregory Budagovo. At the end of the evening tradition on the bridge across the Ob drove this locomotive was the beginning of 1950-ies.

How many of the city’s residents really went to the museums in the night from Saturday to Sunday will count in the local Ministry of culture on Monday. However, from the conversations of visitors, it is clear that the company didn’t stop at one Museum, and I wanted to catch the 3 to 4 sites for the evening.

The first of may, thousands of city’s residents walked from House officers to Lenin square — NGS have collected the best pictures of the Demonstrations–2018.