Becks brings the hit gangster drama to life with these dapper new designs. 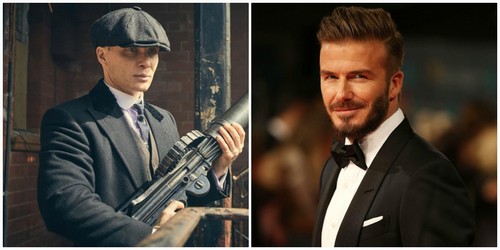 Now that he’s not too busy scoring goals being a downright legend on the soccer field, David Beckham is the co-owner of the clothing line Kent & Curwen, which just released a new collection in collaboration with the hit BBC show Peaky Blinders.

The collection, «By the Order of the Peaky Blinders,» was designed by creative director Daniel Kearns and comes labeled as by «The Garrison Tailors.» It includes flat caps, three-piece tweed suits, waistcoats, wool overcoats, collarless shirts, and peg pants.

So basically everything your grandfather wore in his youth if he lived in England, and all very 1920s. That’s certainly appropriate, considering the brand has been around since 1926 (Beckham became the majority shareholder in 2015), and Peaky Blinders is set in that era.

The capsule was unveiled at London Fashion Week and is part of the Autumn/Winter collection…and for reference, Garrison Tailors is also a menswear brand founded by the show’s creator Steven Knight, and sells all Peaky Blinders-inspired frocks.

Speaking with the Guardian, Becks said he’s a «big fan of the show.» Regarding the new collection, he added that «Our brand has always been about the look. It keeps that authenticity.»

Speaking of Peaky Blinders, Beckham was seen hanging out on the set of the new season which led fans to believe he has a role or at least makes a cameo appearance in Season 5.

Those rumors were shut down, but you never know. I guess we’ll just have to wait and see. After all, he’s already got the wardrobe ready to go.

The Wildest Looks from the 2019 Met Gala