Pre-orders are open for the JetPack Aviation Speeder, which can hit 150 mph at 15,000 feet. 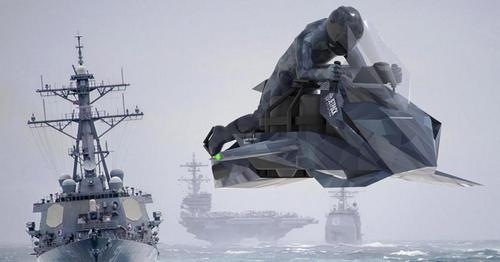 A California startup is now taking pre-orders on what they claim is the «world’s first flying motorcycle.»

Don’t confuse the JetPack Aviation (JPA) Speeder with the Hoverbike S3 MAV. The latter, which made headlines last year as the «world’s first personal hoverbike,» is powered by four heavy-duty propellers, has a max altitude of 16 feet, and hits a top speed of 65 mph.

The Speeder’s specs are superior—and slightly terrifying. Four turbojet engines rigged in a self-stabilizing fly-by-wire control system can send the aircraft past 150 mph and 15,000 feet into the sky.

Depending on the rider’s weight, the Speeder can run for up to 20 minutes on diesel or kerosene fuel. It’s also equipped with a 12-inch touch screen for navigation and a two-way radio.

That futuristic design may sound a little far fetched, but it’s important to remember that it comes from the same company that delivered on this 100-mph personal jet pack.

According to New Atlas, JPA has plans to build two different versions that won’t require a license to pilot under the Federal Aviation Administration’s law, and one that will.

Price of is currently listed at a steep $380,000. You can pre-order one of just 20 units for $10,000 now to receive a host of exclusive add-ons like a custom engraved serial number, customization options, a personalized flight suit and helmet, limited-edition paint, and a swag kit.

JPA will only build the a government-spec Speeder for military use after that production run ends, so this could be your only shot to reserve your model of the world’s first flying motorcycle.