Moto Studio’s two-wheeled creations have the need for speed. 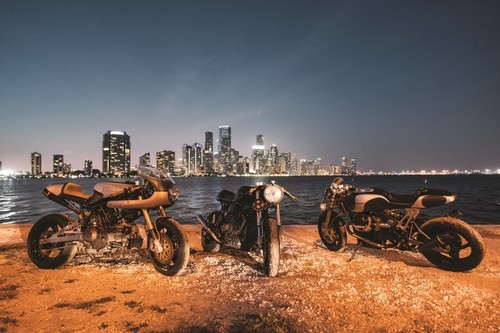 In the 1950s, with time on their hands
and adrenaline in their veins, London’s rebellious youth rolled up their sleeves and started modifying BSAs, Triumphs, Nortons, Vincents and other Britishbuilt motorbikes to go much, much faster.

Channeling Marlon Brando in The Wild One
while wearing UK-made Lewis Leathers, they convened at the Ace Cafe to swagger and swap stories and spare parts — hence the term “café racer” was born.

Getting from the Cafe to the Hanger Lane roundabout and back before the jukebox stopped is said to have earned you membership in the infamous “ton-up club”, only possible with modified bikes that could easily do 100 mph, i.e. the “ton.”

Some modern machines can almost get there in first gear, but at the time it took Glengarry Glen Ross-sized brass balls: no fuel injection, no variable valve timing, and no Kevlar body armor to protect you if it all went sideways.

Fast forward 50 or so years. Suddenly everything is “bespoke” again.

And once again everyone wants a one-off special motorcycle. Only this time around tinkering has become an eccentric profession; filled with alchemists who build custom masterpieces. With exotic hearts, advanced materials, and systems that would confound even the most sophisticated Ace Cafe racers of old.

These bespoke pieces of art are there to be ridden. But also shown off at the weekend. The rebel rocker genome edited by a true specialist. 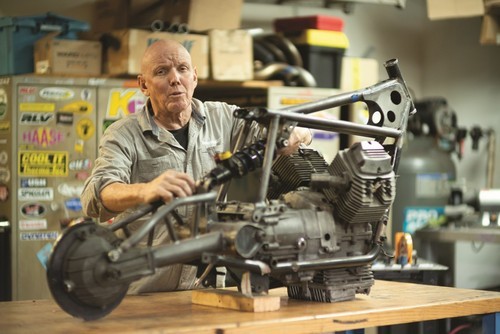 That would be Bruce McQuiston. Part speed freak, part sculptor, part eccentric tinkerer. He’s a man who has had a need for speed for a long time, paired with an appreciation for beautiful form and materials. Not
to mention that he looks like a Bond villain.

McQuiston followed a degree in sculpture by making a living as a race car driver, and racing coach and engineer. At some point he decided he wanted a café racer — and also to man up and sculpt his own. Hence Moto Studio was born in Miami a few years back.

As with AMG, or Brabus, the approach was to take something good and make it great. McQuiston prefers twin cylinder Ducatis and Moto Guzzis for their character and torque. But we have hopes of persuading him to do a Triumph triple.

“We did one BMW that was pretty cool,” he concedes, but notes that it was “just as passionless as any other appliance in your house.”

Every build is a heady combination of “contemporary materials, functional design and nostalgic ties to important motorcycles of the past.”

“No matter what I do, I cannot escape my mechanical sensibilities,” McQuiston tells Maxim.

“Two of the key elements required in both riding a motorcycle and creating sculpture are perception and control. While my goal is to control the design of the sculpture, I want to bring out the beauty from these magnificent materials and allow them to have an influence in the design process.”

Each Moto Studio machine is as unique as its creator, its owner, and its name: Cafe Nero. Goldmember. High Roller.

The process begins afresh with every new client, whose measurements are taken, much like a custom suit. A donor bike is found.

Everything is peeled back to a pile of pieces. Engine rebuilt, and made much more powerful. All new systems. Hand crafted exhausts, frames, tanks, swing arms and suspension. Carbon fiber, solid blocks of aluminum, and bespoke parts everywhere.

By the time the process of transformation is complete what was a 500-lb. heavyweight with the manners of an enraged sumo wrestler has become a lean, mean, damned handsome racing machine.