While Battlefield V is set to launch (on November 20) with a variety of maps, gear, and single-player content, DICE is already giving fans a peak at what they can expect from post-launch updates.

Chapter 1: Overture is the first of these updates, and it will be available from the beginning of December through January.

Plans for Overture include:

Chapter 2: Lightning Strike is set for January to March, and it has «a focus on vehicle warfare and rapid infantry movement.»

Regarding Battlefield‘s foray into the increasingly popular genre, DICE elaborates:

Mix a shrinking playing field with trademark Battlefield elements such as team play, powerful vehicles, and destruction, and you get many unique Battlefield moments coming your way.

Additionally, Trial By Fire introduces a new map in Greece and weekly events and rewards. 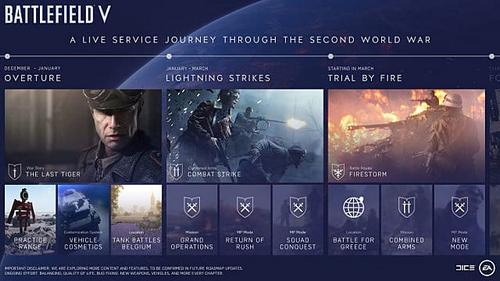 Beyond these first three chapters, DICE is committed to introducing even more gear, game modes, and maps.

Stay tuned to GameSkinny for further details on these additions as they develop.