We may see some form of Diablo announcement at BlizzCon this year, but a set of merchandise with a new name isn’t an accidental leak, according to the studio. A set of new items listed on the Blizzard Gear Store raised eyebrows with a conspicuous subtitle: «Diablo Reign of Terror.» However, Blizzard has told GameSpot these are not related to any new content being prepared for the show.

The items include a poster and a men’s and women’s T-shirt, all showing the frightful visage of the series namesake himself. That raised suspicions that «Reign of Terror» could be the subtitle of a new game or expansion, especially given that Diablo hasn’t had either since Reaper of Souls in 2014. But not so, says Blizzard.

«These are names and copy used for some of the new products available at BlizzCon this year, and not direct references to content at the show,» a spokesperson told GameSpot. 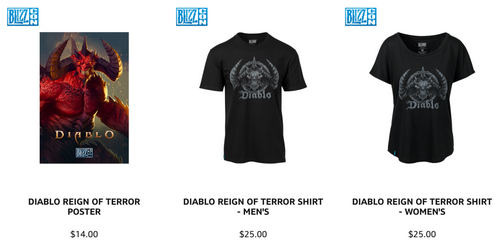 We first began expecting to see a Diablo announcement due to Blizzard’s own schedule for BlizzCon 2018. The «Diablo: What’s Next» panel follows first after the main stage keynote. The existence of a «What’s Next» panel itself isn’t telling—just about every ongoing Blizzard game gets one—but coming just after the main stage presentation is usually reserved for the biggest announcement of the event. Diablo also has a second planned panel about the world of Diablo, scheduled for the following day.

Blizzard has previously indicated it has multiple Diablo projects in the works. We know about one of them, since Diablo 3 was announced for Nintendo Switch, but the phrasing definitely implied more than one is in development. «Some of them are going to take longer than others, but we may have some things to show you later this year,» said community manager Brandy Camel.

The Black Market Returns to Call of Duty: Black Ops 4