VR is becoming home to an increasing number of AAA titles, and, on December 14, one more will arrive on PlayStation VR: Borderlands 2 VR.

More than just a VR port of the 2012 shooter, Borderlands 2 VR will feature «new VR-specific mechanics and skills.» More specifically, players will have «BAMF (BadAss Mega Fun) Time» at their disposal, allowing them to slow down the action around them while remaining at full speed themselves.

«Activating BAMF Time will give you the speed and reflexes of a rabid skag,» a blog post from Gearbox states, «allowing you to dodge bullets, pull off 360 no-scope headshots, and even use your Action Skill to fight off hordes of bandits, bullymongs, and whatever else Pandora might throw at you.»

With the addition of BAMF Time, Gearbox has altered class skill trees to include upgrades to this new mechanic, making certain that it scales properly as players progress through the game.

Additional adjustments are being made to the skill trees to accommodate for another change Borderlands 2 VR is making to the base game; it is an exclusively «single-player experience», a change that may prove disappointing to many fans of the original release’s rich co-op system. 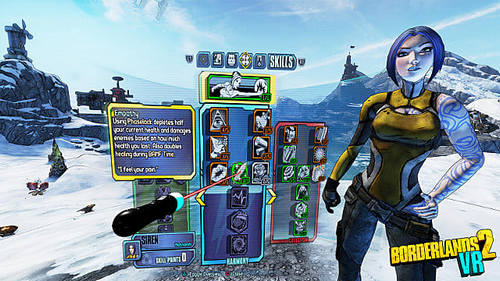 Gearbox also shared some exciting news about vehicle gameplay in Borderlands 2 VR: it will take place in first-person.

«While accelerating and steering with the PlayStation Move motion controllers, players will be able to aim the vehicle’s guns with their headset,» Gearbox’s post elaborates.

Since the announcement, fans have been hopeful that PlayStation VR Aim Controller will be supported, and the developers have clarified with a Tweet:

Will the lack of co-op and Aim support keep you from jumping in to Pandora? Let us know in the comments below.

Pokemon Go’s Gen 4 Region-Exclusive Pokemon: Where To Get Pachirisu, Chatot, And Carnivine