The end of October is near, which means if you haven’t picked up your free PC games from Twitch, you’ll run out of time before you know it. The games are free to anyone with an Amazon Prime account; all you have to do is link it to your Twitch account, and you’re good to go. This is a particularly fine month for fans of horror and creepy games in general, because that’s the theme for this month’s titles. It’s the month of Halloween, after all.

The games in question are fairly well known, headlined by Darksiders: Warmastered Edition. In it, you play as War, one of the Four Horsemen of the Apocalypse, who sets out to fight back the forces of hell after the cataclysmic event gets triggered prematurely. If you can get past the title, you’ll find a fine action game that mixes combat inspired by God of War with the types of elaborate puzzles you’d find in a Zelda game. With Darksiders 3 launching November 27, now is a great time to play this one. 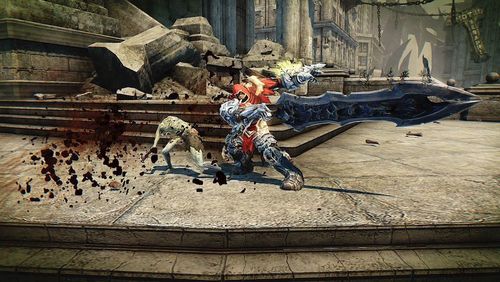 Next up is Soma, a fittingly chilling addition to this month’s freebies in which you must make it through an underwater research facility and learn what’s going on there while being hunted. Then comes the point-and-click horror game Sanitarium, followed by the genre-defining action/adventure game System Shock.

To collect your free games, just head over to Twitch on a computer and click the crown-shaped icon at the top of the page. That opens a dropdown menu with a list of all the freebies you’re eligible for. Click the button under each game to add it to your account, then go to the «My Games» section of the Twitch desktop app to install it.

You can also pick up a free Golden Loot Box in Overwatch between now and October 8, and some free PUBG gear until October 17.