For fans of truly old-school gaming, today is a great day: two new Atari items have hit the shelves. Both allow fans to take Atari games with them wherever they go, and one even lets them play those games when out and about. 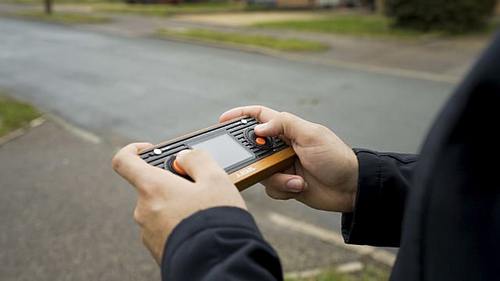 The Atari Retro Handheld packs 50 Atari 2600 games into a handheld console with a 2.4 inch color screen. It features a two responsive buttons and an analog control stick, as well as the classic Atari look with wood veneer.

As an added bonus, whenever players get tired of playing on the small screen, they can easily plug it into a TV using the included A/V output.

Also available today is the Atari Retro Plug and Play TV Joystick. Featuring the same 50 games available on the Retro Handheld, the Joystick uses the classic Atari joystick design and adds a new arcade button at the top for easier firing. Players can connect it to almost any TV using an included A/V cable. For those wanting HDMI, and adapter is available.

Both the devices include the same games, including classics like Asteroids, Breakout, Centipede, Pong, and Missile Command. A full list of included games can be found on both the Atari Retro Handheld and Atari Retro Plug and Play TV Joystick sites.