As part of Fortnite‘s 6.20 update, developer Epic Games rolled out a spooky new event for Halloween. Fortnitemare sees the floating cube affectionately known as Kevin turning a little malicious and spawning Cube Monsters, which are essentially zombies. There’s also a few new cosmetics to unlock and, of course, you’ll need to do challenges to get many of these. Challenges are being split over multiple parts, and you can find details on it here. Day 2 is now available, and you can read about them below. [Update: The full set of Fortnitemares challenges are available; be sure to get them done before the upcoming one-time-only event.]

For Part 2 you’ll need to kill 150 Cube Fiends, do 5,000 points of damage to them using Shotguns or SMGs. On top of those, you also have to kill three enemies in Corrupted Areas and destroy a Ghost Decoration in seven different named locations. Complete those four challenges and you’ll unlock a new spray. 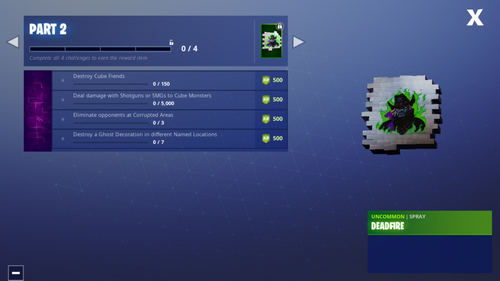 Completing these will also get you one step closer to getting the Dark Engine Glider. You’ll need to complete all four parts of the Fortnitemare challenge set to get this. If you’re looking for a more immediate Halloween-themed unlock you can get the Deadfire skin in the in-game store now. This is a new kind of outfit that changes as you progress in a match. This, Epic says, will let players «show off [their] skills in style.»

The skins change depending on the damage you deal to your enemies and also how long you’re able to stay alive. The skin also comes with the Shackled Stone Back Bling and the Dark Shard pickaxe is also available in the store. These are also reactive cosmetics.

Epic Games has also detailed the contents of Fortnite update 6.20 which, along with giving players Fortnitemares, adds the new Six Shooter weapon to the game. It also gives players the ability to redeploy Gliders after they’ve landed on the Island. This feature is something Epic is testing, so it’s available in all Battle Royale game modes

Massive PS4 Game Sale On The US PlayStation Store This Week 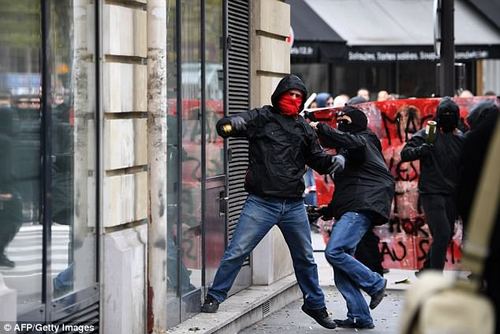