Battle royale style games took off in popularity last year thanks to PlayerUnknown’s Battlegrounds and reached new heights with Fortnite. Now, the Call of Duty franchise has hopped onto the fray with Black Ops 4’s new Blackout mode, which you can read about in our Black Ops 4 review. If you haven’t experienced battle royale for yourself, but plan on hopping into Black Ops 4, this is for you. We’ll run through some of the basics of the mode and cover the ways in which Call of Duty puts its own spin on it.

First off, you can enter matches either as a lone wolf (solo), with a partner (duos), or a team of four (quads); you’ll be matched with up to 100 players who choose the same group size option. Every player gets flown over the map in the same trajectory—visualized when you pull up the map—and it’s up to you when and where to drop. Exiting the helicopter has you deploying your wingsuit, and you can glide horizontally to go further out or look straight down to drop faster.

The overall goal is to be the last player or team standing since everyone has one life, which makes combat encounters much more tense and risky compared to traditional Call of Duty multiplayer. Now more than ever, you should be aware of your surroundings; that or have a teammate watch your back. Also keep in mind that you can revive squadmates if they fall, but be sure to do so before they bleed out or take more damage from enemies.

Another basic ingredient of battle royale is the impending pressure of a deadly circle closing in on the battlefield. Every match has the circle contracting on a random area of the map, and it gets smaller as the match goes on to force remaining players into combat. If you get caught outside the circle, you’ll take damage until you can get into the safe zone.

A Huge Map To Traverse

Blackout’s map is much larger than any previous Call of Duty map since it has to accommodate 100 players. However with size of the map, it also induces a slower pace; so expect plenty of downtime between encounters. This change of pace may take a while for Call of Duty veterans to adjust to, but it also feeds into the high-stakes nature of combat in battle royale games since one small mistake can cost you an entire match.

There are 14 concentrated areas in the Blackout map, many of which pay homage to past Black Ops maps. For example, Nuketown Island, Estate, and Array will look and feel similar to the multiplayer maps they’re named after. The in-between of these main locations is interspersed with smaller towns and groups of buildings that can have valuable loot. But vast forestry and open fields make up most of the terrain, so be on-guard when traversing between locations as firefights may break out at any moment. 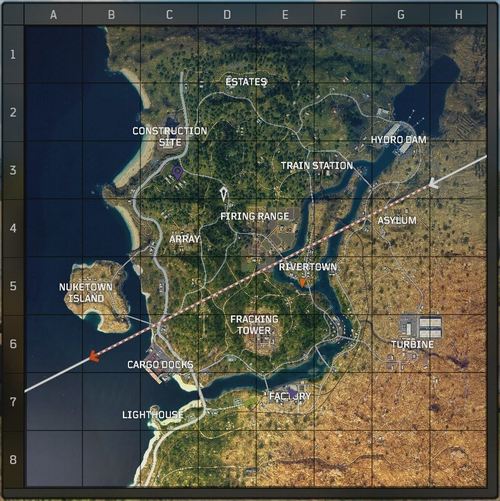 Luckily, vehicles litter the map. An ATV doesn’t provide much protection but it can get up to two players around from point A to point B fairly quickly. The cargo truck fits up to five players and doesn’t leave the squad as vulnerable, but it moves pretty slow. Getting through the river that splits the middle of the map is quite easy with a zodiac boat, which holds up to four players. And unlike most battle royales, Blackout features air transportation via the helicopter that has five seats total. That’s not the only means of air travel, though; you can deploy your wingsuit by sprinting and jumping off a building and holding the jump button.

You start each match without anything in your inventory and must loot all your equipment—a stark contrast to Call of Duty’s tradition of letting players customize their loadouts. You’re allowed to carry two weapons and have to scavenge for the proper ammo type for each as well. The following is a list of all the weapons available to loot in Blackout:

Attachments are crucial for getting the most out of your weapons. A reflect sight or 4x scope will come in clutch for nailing precise shots with ADS, and a grip or stock will help control your recoil, but you need to scavenge for those items and get them onto your gun. Zombie weapons add a twist to combat, which can be found in zombie supply stashes after killing AI-controlled zombie hordes at certain locations in the map, like the Asylum. Even the sillier items find their way into Blackout, like the Ray Gun, Monkey Bomb, Acid Bomb, and RC Car (though it doesn’t explode). Look out for blue beacons that shine in the sky as this indicates stash locations where you may get your hands on these rare items. 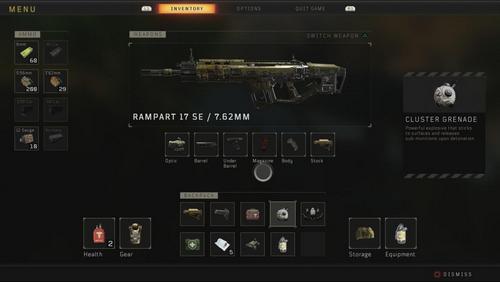 You’ll also have to loot armor in Blackout; there are three levels and each one provides better protection (level 3 armor is the only one that’ll protect from headshots). Backpacks open up five additional item slots, which comes in handy later in a match as you loot more useful equipment. And it goes without saying that stocking up on health items is important, too; first aid and med kits heal 25 and 50 health, respectively. Trauma kits will fully heal you and tack on an additional 50 health temporarily.

Be on the lookout for supply crates that randomly drop onto the map throughout the match; you’re likely to find high-level loot, but creates a hotspot for preying enemies.

In another interesting twist, Blackout’s take on battle royale also brings in the familiar Perks system, which act as consumable items found across the map. Each perk has a specific effect, usage limit, and duration. While some may be more useful than others, it’s important to know what your equipped perk does as it can make the difference between life and death, especially in their most effective situations.

The following is a perk list and what they do:

Black Ops 3 introduced Specialists, unique characters that provided a variety of ways to play the game with their own attributes and abilities—akin to a hero shooter. While you can choose to play as a certain Specialist in Blackout, the equipment that was once tied to them are now items found in the field. Those abilities—such as the razor wire, mesh mines, and grappling hook—are hard to find, but they can give you a significant advantage when used in the right situation.

You can unlock different characters to play as in Blackout, as detailed in our guide on that subject.

Those are the basics when it comes to playing Call of Duty Black Ops 4’s Blackout mode. Battle royale veterans may know how the rules work, but the equipment system and map are still things that need to be experimented with and explored on your own. The most important thing to do is to play more and more matches to get a feel for how Call of Duty’s take on battle royale flows. And now that you know what you’re getting into, take the next step and check out our Blackout beginner’s guide.

For a more comparative look, see how Blackout, Fortnite, and PUBG differ from one another. We’ve spent a lot of time with the game and working to reach a verdict on it, but check out our Call of Duty: Black Ops 4 early review impressions in the mean time.