October has arrived, and this month is packed with some major releases for PS4, Xbox One, PC, Nintendo Switch, and even 3DS. With the holiday season quickly approaching, some of this year’s biggest titles are set to debut soon, including this year’s new Call of Duty game, Black Ops 4, and Rockstar’s highly anticipated western, Red Dead Redemption 2. 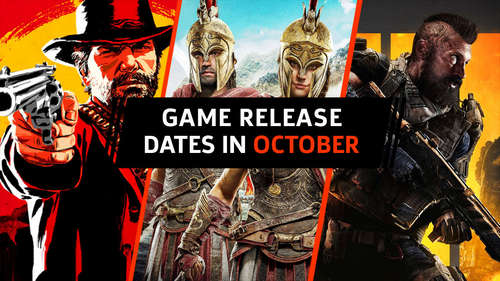 But while those titles may draw the most attention, they are hardly the only noteworthy games coming to each platform this month. Capcom’s Blue Bomber Mega Man returns after a long hiatus with Mega Man 11, while the GameCube classic Luigi’s Mansion arrives on 3DS in time for Halloween with a few new features in tow, including cooperative multiplayer. Square Enix’s cult classic DS RPG, The World Ends With You, is also making a comeback this month when Final Remix launches on Switch.

There are plenty of other games worth checking out this month, as well. You can see all of the biggest releases for each platform in October 2018 below. For a look at all of the other games coming this year, be sure to check out our complete list of game release dates in 2018.

The latest installment in Microsoft’s open-world driving series, Forza Horizon 4, kicks off this month’s releases, arriving on Xbox One and PC on October 2. This time, players will be able to cruise around Great Britain at their leisure in a variety of different vehicles. The biggest new feature, however, is the introduction of seasons, which will cycle every week from the game’s launch. Like other first-party Microsoft games, it is also available in the Xbox Game Pass catalog.

Following a brief hiatus, Ubisoft’s Assassin’s Creed franchise returned last year with Assassin’s Creed Origins, a new interpretation of the series that featured an open-world setting and RPG elements. This year’s follow-up, Assassin’s Creed Odyssey, takes the franchise to Ancient Greece and builds upon these features with an even larger world to explore, romance options, and a much greater emphasis on player choice.

Call of Duty: Black Ops 4 arrives on PS4, Xbox One, and PC on October 12. Unlike previous installments in the series, this year’s entry forgoes a traditional single-player campaign in favor of solo missions centered around each Specialist, and it introduces a number of new modes to the fore, most notably the battle royale-style Blackout. It also launches with an expanded Zombies mode, with three different Zombies episodes available right off the bat.

Rockstar’s highly anticipated Red Dead Redemption 2 closes out a month on October 26. This installment is set 12 years before the events of the first Red Dead Redemption and follows new protagonist Arthur Morgan as he and the Van der Linde gang flee from the law across the American frontier. The game features a sprawling, detailed world that reacts to your actions, along with a wealth of activities to take part in, from hunting and fishing to good, old-fashioned holdups.

PS4’s Exclusivity Window Is Shorter Than Usual For Call Of Duty: Black Ops 4