Red Dead Redemption 2’s release has come for both PlayStation 4 and Xbox One. Those who prefer to play games on PC may be rewarded with their patience eventually, but as of now we have no indication that Red Dead 2 will ever come to PC. That doesn’t mean there is no hope at all, though. 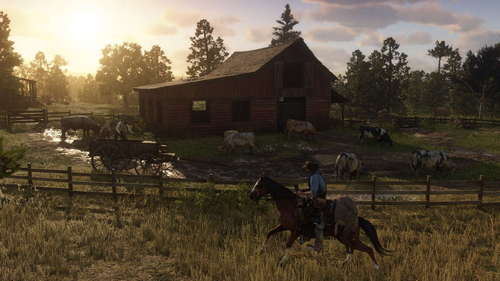 So far the studio has given no official indication of a PC port incoming. There was some hope when a programmer seemingly outed a PC version online, but it remains unclear if that was merely a mistake. [Update: The latest glimmer of hope for PC fans comes via Rockstar Intel, which reports that the Red Dead 2 companion app includes references to PC in its code. It’s possible these don’t mean anything or are being misinterpreted, but it does bear noting.]

The most recent Rockstar game, Grand Theft Auto V, did make the jump to PC after its initial console release. Following its original release on PlayStation 3 and Xbox 360 in 2013, Rockstar released upgraded Playstation 4 and Xbox One ports the following year, and then a PC port in 2015. Those later ports were widely lauded for their improved technical underpinnings, and the PC version has enjoyed an active mod community.

Red Dead Redemption 2 appears very similar to GTAV in key ways. It’s a technical powerhouse that’s already pushing the current console generation to its limit. While the Xbox One X came out ahead in a performance analysis, both it and the high-end PS4 Pro were said to be hitting the upper limits of their processing power. We may be on the verge of another console generation to debut in the next few years, so a port to those with some added bells and whistles could make sense. And if that happens, a PC port would be likely as well. Plus Red Dead 2 is already receiving positive reviews and helping Take-Two’s stock price, so another shot in the arm from a port would be welcome for the company.

Then again, Rockstar has been inconsistent with ports in general and PC support more specifically. The original Red Dead Redemption never made the trip to PC, and in fact is still only available on PS3 and Xbox 360—along with Xbox One, via backwards compatibility.

Red Dead Redemption 2 could come to PC in a matter of years, but for the time being, your best bet is to saddle up on the current generation of consoles. If you need some help recalling the events of the first game, check out our story recap. Your console decision may come down to performance—keeping in mind that Xbox One X performed the best in a test, but PS4 has exclusive content for 30 days.

Take Your Farm on the Road with Stardew Valley Mobile