Alongside the ongoing Fortnitemares challenges, Fortnite: Battle Royale players have reached Week 5 of Season 6. As with every Thursday weekly reset, that means there’s a whole new batch of weekly challenges for you to complete. Doing these is vital if you want to unlock fresh cosmetics, as completing challenges rewards you with the Battle Stars needed to level up your Battle Pass. We’ve got a breakdown of Week 5’s challenges below—including the flaming hoops and radar signs ones—but if you want to catch up on every week so far, we’ve got a comprehensive Fortnite Season 6 challenge guide that’ll help you do that.

This week’s challenges in the free section, which is available to everyone, involve recording a speed of 27 or more on five different Radar Signs. On top that, you’ll need to jump through five flaming hoops while in a Shopping Kart or ATK. There’s also a three-part challenge that begins with doing damage using Tactical Shotguns. 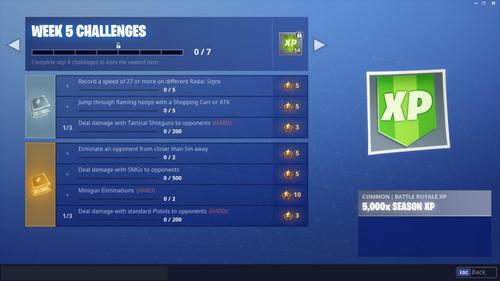 These aren’t the only challenges available this week, however. Epic Games recently rolled out Fortnite update 6.20 and, as part of that, the Fortnitemares Halloween event. This is an ongoing world event that provides players with the opportunity to get the new Outlander skin, alongside other cosmetics. However, you’ll need to complete a bunch of challenges to do this. You can find out more about the Fortnitemare event and challenges here.

The Halloween happenings on Fortnite’s island also include a makeover for the rocket launcher, which becomes the Pumpkin Rocket Launcher. There’s also a new weapon: the Six Shooter. Take a look at the full Fortnite update 6.20 patch notes for more on what’s new and changing in Fortnite.