While some players have already taken matters into their own hands, Bandai Namco has announced that Nier: Automoata‘s 2B is making her way to SoulCalibur VI. 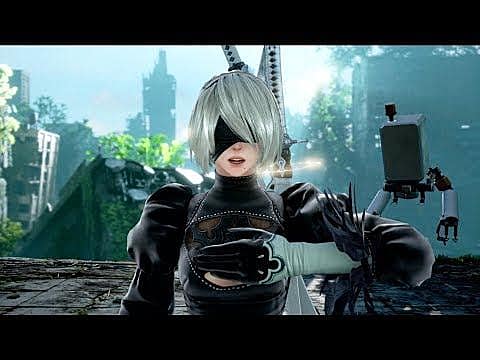 In the reveal trailer, we see 2B wielding two weapons from Square Enix’s excellent action-RPG, the Virtuous Contract and Virtuous Treaty, and it indicates that the Type-4O Sword and Type-4O Blade will be available as well.

Further, with 2B comes new stickers (including the head of Automota‘s incarnation of Emil), a new stage that brings Nier‘s post-apocalyptic world to the fighter, and additional background music.

And, for those of you that like your battle androids more scantily-clad, there will be an additional costume modeled on Kaine’s «outfit» (lingerie) from Nier: Gestalt.

The trailer shows off a fast and fluid combat style familiar to those that have battled alongside 2B before, and she looks to be a wonderful addition to the fighting game du jour.

2B will be available to owners of the SoulCalibur VI Deluxe Edition and season pass holders «soon.»

If you have not already sprung for a season pass, will the arrival of 2B convince you to do so? Let us know in the comments below.