It’s October again, and that means time for Halloween festivities throughout a whole host of online games. Many announcements have already begun to outline the upcoming festivities, so we’re keeping track of all the spooky specials. Many of these will be time-limited events with special rewards, like the Overwatch Halloween Terror event, so check out the active dates and plan your gaming accordingly.

Black Ops 4 is offering Halloween themed cosmetic items as part of its Black Market store front. Regularly rotating Contraband seasons, called Operations, will offer a list of free cosmetic items as rewards for earning game progress. Special seasonal Operations will be swapped in periodically as well, starting with the Halloween event. It will offer spooky gear to earn starting October 20 on PS4 and then follow a week later on PC and Xbox One. That only leaves a few days to get in on the Halloween action on certain platforms.

The Dauntless Dark Harvest event will kick off in the middle of the month, casting a shadow on the hub city of Ramsgate. It will introduce a new cult known as the Unseen, who worship a Behemoth. Slayers can test their might against a new Behemoth in the Shattered Isles and stores will offer limited-time exclusive items.

DC Universe Online is introducing The Witching Hour. You can head into the East End safehouse and speak to the Phantom Stranger if you’re a hero, or talk to Tala in Burnley’s The Tap Room if you’re a villain, to begin the quest. You can also unlock Halloween-themed feats, collections, and base items.

Destiny is bringing back its annual Festival of the Lost, the Halloween-themed celebration that offers some special masks and exclusive loot. This year, it will include a horde-like PvE mode, a special quest-line to solve a murder, and a unique currency to purchase masks and a special auto rifle called Horror Story. You can also earn new Ephemeral Engrams for exclusive cosmetic items. This will all be accompanied by the return of the Iron Banner event, with some tweaks to make it easier to obtain Powerful gear.

Fortnite’s Halloween event this year is «Fortnitemares,» an ongoing world event that offers special challenges and spooky cosmetic items and special play modes and challenges in Battle Royale and Save the World modes. You can take on AI-controlled enemies in the PvP mode to earn rewards, or head into Hexylvania in PvE.

Hearthstone’s annual «Hallow’s End» celebration starts on October 17 and lasts through Halloween on October 31. Logging in during the event will net you a free golden Witch’s Cauldron card, and the Headless Horseman will return for a new Tavern Brawl starring the characters from the Monster Hunt mode. You’ll also be able to take part in a dual class Arena mode, and characters will use Hallow’s End emotes. Finally, the event will accompany the launch of a new Paladin hero for purchase with a new Witchwood bundle.

As part of its promotion for Hitman 2, IO interactive is offering a free mission in the original Hitman. The entire stage of Colorado is free for anyone to download and play for a limited time, along with all of its Escalation and Featured Contracts. IO has also made a series of ten new Featured Contracts as well, with a focus on the spooky or disguise-focused. Plus, as part of the promotion Agent 47 gets a free Scarecrow costume that he can wear around to be generally creepy.

Killing Floor 2 has already introduced its Halloween Horrors: Monster Masquerade update. The sprawling update includes a new Monster Ball map, along with Halloween-themed looks and effects for all the zeds and bosses. Plus you can access new weapons and limited-time items to take them all down.

Overwatch’s annual Halloween Terror event is once again here. Each year the Halloween Terror event continues the story of Junkenstein’s monster, and this one serves up two separate PvE modes: Classic and Endless Night. The event is always a debuts several new Halloween-themed skins, emotes, sprays, and more. It is going on now through October 31, and Blizzard has revealed all the nifty new costumes.

Rocket League is bringing back its Haunted Hallows event on October 15. You can earn «Candy Corn» currency for playing online matches, which can then be used to cash in for limited cosmetics like decals, toppers, and wheels. You can also gain a Golden Pumpkin that will contain a customization item from the Nitro, Turbo, or Player’s choice crates. The event will end on November 5, and your Candy Corn will expire on November 8, so make sure you cash it in fast. 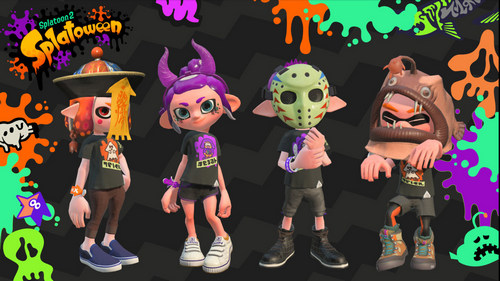 The Splatoon 2 version of a Halloween gathering is a twist on its usual monthly Splatfests, appropriately named Splatoween. It will start October 19 and last through October 21, with players picking their sides in a Turf Wars between Team Trick and Team Treat. Inkopolis will also be updated with Halloween decorations, and the squid kids will get a chance at four special Splatoween headgear that can be kept after the event is over. You’ll have to go through the Nintendo Switch News app to get them, however.

World of Tanks Blitz is introducing its own Halloween-themed mode, called Mad Games. The event was produced in collaboration with Peter Pound, the principle vehicle designer for Mad Max: Fury Road. Pound has created two special tanks that are only unlockable during the Mad Games event: the V level Scavenger and the VII level Gravedigger. Players can also take their tanks, new or old, into a post-apocalyptic map complete with sandstorms and special powers like invisibility and vampirism. The game has also added special holiday flair, a post-apocalyptic hangar, and brought back some of the most beloved tanks from past Halloween events.