Red Dead Redemption 2 for PS4 and Xbox One is out now, and it offers you a variety of weapons to get the job done. Whether it’s hunting for survival, defending your honor in a duel, or robbing a moving train, players will have plenty of options at their disposal to suit their needs. However, the game also allows weapons to be customized so it not only performs exactly how it needs to, but also looks the way you want it to. 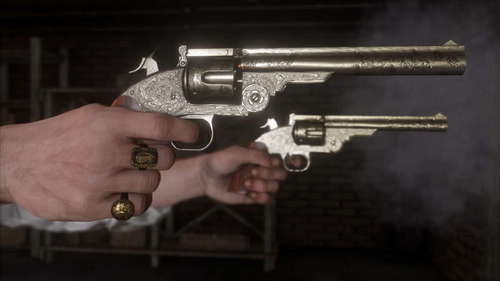 Before we explain the customization options available, we thought we’d offer a quick tip: try not to purchase guns early in the game. Money can be hard to come by in RDR 2, and firearms are quite expensive. Instead of coughing up your hard earned/robbed cash, focus on completing main missions, as they more often than not will outfit you with something new. The best weapons are found in the late game, so it’s worth keeping that in mind too.

Customization is enabled through the Gunsmiths that are dotted around the world. By visiting them, you’ll be able to clean your guns as well as run maintenance on them, alter components, change styles, and pick up ammo. Some components affect the states of a gun, so, for example, a longer barrel will improve bullet stability and thus accuracy. Scopes can also be added to sights for long-distance targets. However, other components don’t change the stats. Stock, for example, lets you pick different grains for the wooden parts of your weapons, while wraps protect your weapons from wear and tear.

Style, meanwhile, will give your weapon a visual flourish. You can opt to swap out the metal type your gun is made of, the color of it, and even get it engraved with a design to give your outlawing an extra touch of class. You can choose to engrave the entire weapon or specifically the inlay metals, barrel, block, or frame. Shoulder stocks and buttstocks can also be carved into—usually with an image of an animal. Finally, you can also varnish the weapon and add some leather finishes to it.

Finally, ammunition comes in a number of variants, with some improving range stats while others impact damage. It’s important to experiment with ammo types, especially since some can be extra useful for hunting more efficiently. Make sure to study animals when you’re on the hunt and read their compendium entries, as sometimes you’ll find information on what works best to bring them down.

GameSpot’s Red Dead Redemption 2 review is live and in it Kallie Plagge says the game is «an excellent prequel, but it’s also an emotional, thought-provoking story in its own right, and it’s a world that is hard to leave when it’s done.»

For more on RDR 2, watch Quickdraw, our weekly video series. Episode 1 looks at other Rockstar games that have had an influence on the open-world western sequel. Episode 2, which you can watch in the video above, is a story recap of the original Red Dead Redemption.

Just Cause 4 Is Hilarious Chaos, Thanks To Rockets, Balloons, and Lightning Guns