Season 6, Week 5 of Fortnite has officially begun, meaning the next batch of challenges is now live, ready and waiting for you to complete them. This, it turns out, is easier said than done as there’s a couple of tricky challenges among them. The first of these involves finding five flaming hoops and jumping through them using a Shopping Cart or ATK. You might remember this one from previous seasons, as it has been used before. However, the exact locations of the flaming hoops have changed, so you’ll still need to dart around the map looking for them.

Or, alternatively, you could use our handy dandy guide here. We’ve found the flaming hoops and launched ourselves through them. Below you’ll find a list of the exact locations of the hoops, along with a map that offers a visual representation of their locations. All you have to do is head to the points and do your best Evel Knievel impression. Just remember to grab an ATK or Shopping Cart along the way. You can also watch the video above to see us do it. Here’s where to go: 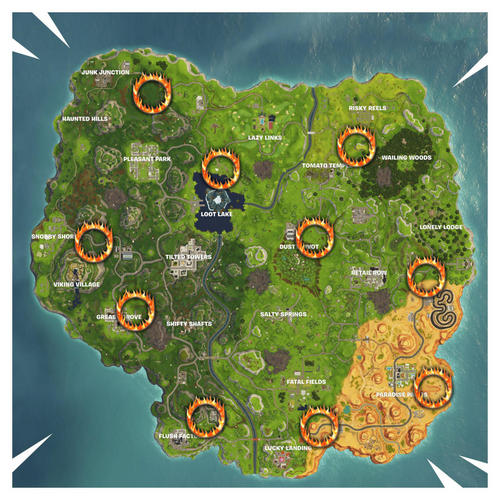 Alongside the weekly challenges, Fortnite developer Epic Games has also kicked off Fortnitemares, a Halloween event with its own unique selection of challenges. The event is quite different from anything Fortnite’s battle royale mode has done before, as it includes an element of PvE.

«During Fortnitemares, you’ll face off against Cube Monsters in a whole new way of playing Battle Royale,» Epic explains. «There are new weapons to fight back against these creepy creatures, like the Six Shooter and Fiend Hunter Crossbow. Take out the Cube Fiends and Fragments to pick up loot, and survive against enemy players.»

The reward for completing the Fortnitemare challenges is cool new cosmetics, including a special skin. The Deadfire Outfit is described as a «new type of reactive outfit» that, as you progress in a match, will change. The shift in visual style is dependent on the damage you deal to your enemies and also how long you’re able to stay alive. The skin also comes with the Shackled Stone Back Bling, and the Dark Shard pickaxe is also available in the store. These are also reactive cosmetics.

All this was rolled out as part of the latest patch. Take a look at the full Fortnite update 6.20 patch notes for more on everything that has been changed, tweaked, added, or removed.