It’s no secret that many long-time Smash Bros. players have an affinity for the GameCube controller. And with Smash Bros. Ultimate set to launch for Nintendo Switch on December 7, you might want to get a Switch controller that’s shaped like its GameCube predecessor. Nintendo is selling a Smash-themed wired controller of its own, but if you’d like to save $5 and get one themed after other Nintendo properties, you’ll soon be able to.

PDP is working on a trio of GameCube-inspired Pro controllers for Nintendo Switch themed after Mario, Zelda, and Pokemon. They’ll be available December 7 (the same day as Smash), but you can pre-order them now for $25 each. Each one comes with a 10-foot USB cable and the option to swap out the traditional small C-Stick with a full-sized stick. If that works as expected, these controllers could feel even more comfortable than Nintendo’s first-party accessory. 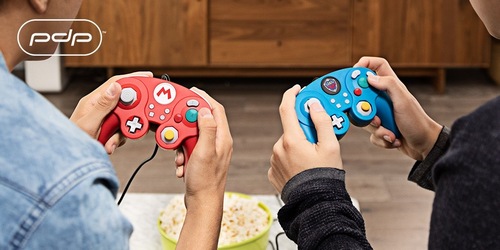 Smash Bros. Ultimate is shaping up to be one of the year’s biggest releases for the Switch, complete with every character that’s ever appeared in a Smash Bros. game, plus a number of newcomers. Nintendo has announced Smash Bros. Ultimate will see the series debut of characters like Metroid’s Ridley, Castlevania’s Simon and Richter Belmont, and Donkey Kong Country’s King K. Rool. If that’s not enough, you’ll be able to choose from 103 different stages, each of which will appear in multiple forms.

In addition to the GameCube-style controllers mentioned above, the game will be playable using a single Joy-Con, Switch Pro controller, or, if you have an adapter, original GameCube controllers as well, including the wireless WaveBird.

In other Switch controller news, anyone looking forward to playing Diablo III on Nintendo’s newest console can pick up a Diablo-themed wireless Switch controller for $50. This GameStop-exclusive item features a demonic faceplate, along with all of the buttons found on a standard Pro Controller, plus two additional triggers on the back you can map with any button input you’d like.