Fnatic crushed the hopes and dreams of all NA fans after clean 3-0 of Cloud 9 in Semifinals Oct. 27. 2018. Never in League‘s history have both teams in the world finals both been from the same group. 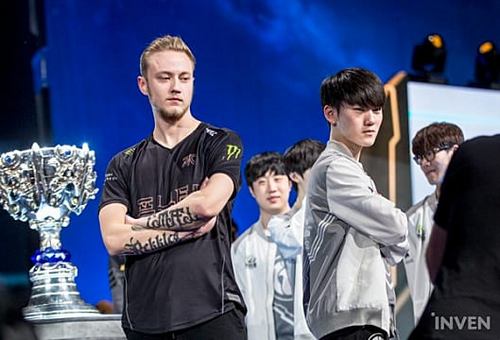 Fnatic and Invictus Gaming will once again meet each other in the finals. Both teams were in Group D, with Fnatic taking first (6-1) and Invictus taking second (5-2). The teams had to play a tie breaker match with Fnatic winning it and taking the first seed out of the group.

How did both teams make it to the finals?

Coming out as EU 1st seed, Fnatics road after group stage started with facing off against second seed EDG in quarterfinals. They struggled in the first game of the series dropping it and going down 0-1 to EDG. Fnatic came back in true fashion taking the next 3 games off of EDG and advancing to semifinals.

Maybe the most hyped face off against NA vs EU took place when Fnatic faced off against Cloud 9, with Cloud 9 coming off an impressive 3-0 against Korean team Afreeca Freecs. Unlike in quarters, they would not drop a game against their NA counterparts. Fnatic has an impressive record going into the finals of (12-2) at worlds this year, only dropping one game during quarters and semis.

Coming out of China as the second seed, maybe didn’t start off as many peoples teams to watch but have proven to be one of the best teams at this event.

During quarterfinals Invictus went up against many people’s favorites to win the whole thing. Proving to be a real threat, Invictus started off strong in the series going up 2-0. KT came back and won the next 2 games, making it come down to game 5.

Invictus came out winners on the other side, while looking forward they had to face G2 in semifinals who had just beat Uzi and RNG. Unlike in the quarterfinals, Invictus made short work of G2 with an impressive 3-0 win. Heading into finals while maybe not overall pretty as Fnatic their (11-4) record speaks for itself.

Can Invictus Gaming take down another EU team in Fnatic, or will Fnatic show their dominance over Invictus as they did once before? Tune in on November 3rd to find out which team will win.