In time for Halloween, Epic Games is giving Fortnite a spooky makeover. The Fortnitemare event introduces an element of player versus environment to the game by spawning Cube Monsters, which are effectively mindless zombie-like creatures for players to gun down. Alongside this, there’s an interesting new kind of skin available.

Fortnitemare’s Deadfire Outfit is described by Epic as a «new type of reactive outfit.» This first of its kind skin is more dynamic than the usual ones and actually changes depending on the way you play. As explained in the Fortnite blog, the look of the outfit will change depending on the damage you deal to enemies—both players and the new AI-controlled Cube Monsters. Along with that, the way it looks will shift based on how long you last in a match. Take a look at the three different variants below. 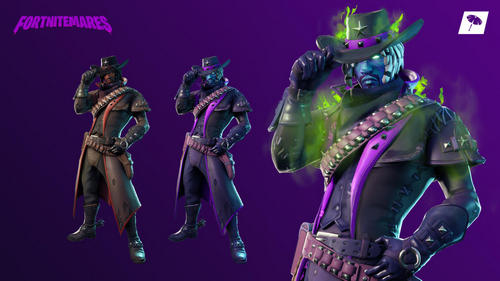 The Fortnitemares event is now live, and there are a unique set of challenges available. You can see all the new Fortnitemare challenges here. Epic has also release the patch notes for Fortnite update 6.20. This is a rather sizeable update that, along with giving players Fortnitemares, adds the new Six Shooter weapon to the game. Players also have the ability to redeploy Gliders after they’ve landed on the Island. This is being tested out by Epic, so it’s available in all game modes.