You might have been enjoying a rare break over the festive period, but Fortnite definitely was not. Epic Games has been continuing to expand its battle royale phenomenon, and its latest update adds a new item, the Boom Box.

A specialist structure-counter, the Boom Box delivers «blasts of music that deal structure damage in a large area,» according to Epic. «Newly built walls in the radius of the box are destroyed with every blast.» Boom Boxes are discoverable in chests, and they are destroyed when shot. They deal no direct damage to players, but completely stop buildings and structures from forming and destroy them if already built. 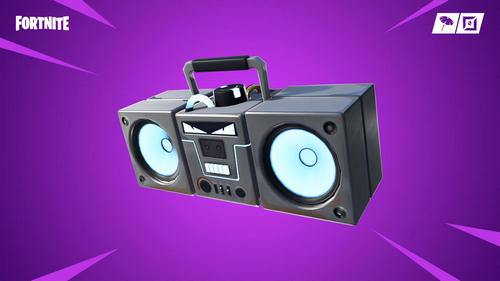 Elsewhere, two new weapons have been added to Save the World. The Pain Train Assault Rifle has a slow rate of fire but high damage, and it’s available in the weekly store until January 9. The Tree of Light Sword, meanwhile, is available as a weekly challenge reward, and is also a high-damage weapon—it does take a while to swing, however. Check out the full patch notes below, via Epic.

Fortnite is currently in Season 7, which offers a bevy of new cosmetics for those who complete the Battle Pass. You can check out our challenge guide for tips on how to complete the various tasks and earn your stars. Meanwhile, Epic is fending off legal challenges from the most unexpected of places: various celebrities and viral video stars suing over the use of their dances.

This is an early release so you may experience client crashes, loss of progress, or other unexpected errors.