It’s still early in the creation process of the Mad Box, developer Slightly Mad Studios’ recently announced new game console. It’s so early, in fact, that there’s not even a definitive design for the Mad Box. Studio head Ian Bell is sharing possible designs for the console on Twitter and asking people for feedback about them.

Bell tossed a few concept photos for the possible Mad Box out on the internet, which all are drastically different. One looks like a PC tower with some plastic and neon accoutrements, while another resembles a Portal 2 Companion Cube, and a third could reasonably be mistaken for something like a Blu-Ray player. 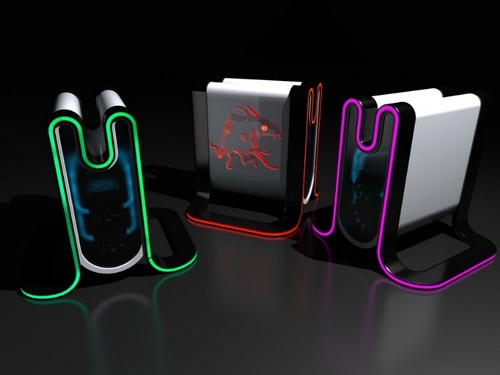 For all three, Bell tweeted things like, «Would love to hear your feedback,» and his attitude online makes it clear the studio is looking for input from potential customers on several aspects of the project.

These latest designs follow other images Bell shared over the weekend of another potential design for the console, which looks like a standard PC tower with plastic pieces acting as stands on either side.

Though Bell has been very vocal about the Mad Box since it was announced last week, we know very little about it. He claims the machine will be the most powerful console ever built,» and support features like 120 frames-per-second in virtual reality. The studio also says it plans to provide a free game engine for developers who want to make games for the console, and that the studio doesn’t believe in trying to make exclusivity deals, leaving developers free to put their games out on other platforms as well.

All that sounds nice, but the Mad Box is still obviously in very early stages—Bell has said Slightly Mad (best known for simulators like the Project CARS games) is in the process of making deals with component makers, and went so far as to blur out the internal components in one Mad Box design image, since they’re not finalized. He’s speculated the console is still three years away at this point, and it’ll definitely face an uphill battle against the existing, well-established PlayStation 4, Xbox One, and Nintendo Switch consoles.

Numerous changes to a lot of gaming hardware came to light in 2018, including consoles. Some were good, and others not so much. Check out our report cards for more detailed accounts.