NetherRealm Studios has released our first look at the story in Mortal Kombat 11. The prologue to the game’s story plays out in a trailer revealed at NetherRealm’s January reveal event, which sees Raiden interacting with Shinnok after the events of Mortal Kombat X and also introduces a brand-new character. 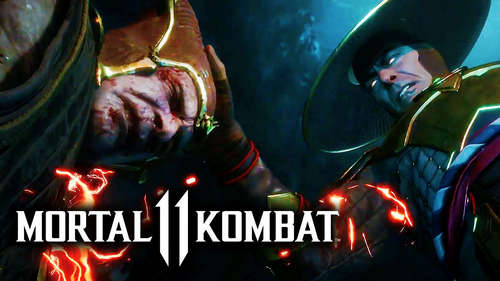 In the prologue, Raiden is wearing Shinnok’s amulet as he tortures the captured Elder God. Shinnok arrogantly reminds Raiden that an Elder God can’t be killed, so the Earthrealm defender simply cuts off his victim’s head while reminding it that there are fates worse than death. The prologue ends with Shinnok’s still-living head being approached by Kronika, the first female boss character in the franchise’s history and who we first saw during the Game Awards 2018.

During the reveal event, NetherRealm also revealed gameplay moments of several characters, including Scorpion, Sub-Zero, Sonya, Skarlet, Raiden, and Geras—the latter of which is a brand-new addition to the franchise. Geras also got a reveal trailer at the end of the event that showcased his incredible time-bending abilities in action, both summoning artifacts from other periods, transporting himself to his past position to avoid enemy attacks, and also freezing an opponent’s time to land some devastating combos.

In addition to again being able to change between different character variations, in Mortal Kombat 11, you’ll be able to customize fighters. Options include a fighter’s costume, intros, victories, abilities, and AI behavior. Mortal Kombat 11 also adds Fatal Blow attacks for each fighter, which act as special, powerful attacks—similar to Fatalities—that can be pulled off in an effort to change the tide of a battle. The one meter devoted to offense, defense, and supers in past Mortal Kombat games has been separated into three different meters for this eleventh entry.

Mortal Kombat 11 is scheduled to release April 23 for Xbox One, PS4, PC, and Switch.